IOM
A displaced family in Marib, Yemen, carries a winter aid package back to their shelter.

More than five years of conflict have left Yemenis “hanging on by a thread, their economy in tatters” and their institutions “facing near-collapse”, the UN chief told a virtual pledging conference on Tuesday, calling for a demonstration of solidarity with some of the world’s poorest and most vulnerable.

“Four people out of every five, 24 million people in all, need lifesaving aid in what remains the world’s largest humanitarian crisis”, said UN Secretary-General António Guterres. “Two million Yemeni children are suffering from acute malnutrition, which could stunt their growth and affect them throughout their lives”.

4 out of every 5 people in Yemen need lifesaving aid in what is the world’s largest humanitarian crisis.Ending the war is the only solution.Yemenis desperately need peace.https://t.co/vBWGH3MqFs pic.twitter.com/4FDZpHUsTF

Moreover, since the start of the year, some 80,000 more people were forced from their homes, bringing the total displaced to almost four million; cholera continues to threaten lives with 110,000 people contracting it so far this year; and recent floods have raised the risk of malaria and dengue fever.

Fighting intensified across Yemen in 2015 between a Saudi-led coalition backing the internationally-recognized Government, based in the south, and the Houthi armed movement, known as Ansar Allah, with still controls the capital Sana’a, together with their allies.

On 10 April, Yemen reported the first confirmed case of COVID-19, posing a terrifying threat to people weakened by years of conflict, and with a health system on the brink of collapse

Since then, cases have risen to the hundreds, which, with extremely low testing rates, are likely to be undercounted.

“There is every reason to believe that community transmission is already underway across the country”, said Mr. Guterres.

Citing reports that the mortality rate from COVID-19 in Aden are among the highest in the world, the UN chief maintained: “That is just one sign of what lies ahead, if we do not act now”.

Against a backdrop of health facilities not functioning; shortages of testing devices, oxygen, ambulances and protective equipment; healthcare workers stricken with the virus; and sketchy electricity supplies in hospitals, the UN chief pointed out that even simple public health measures are challenging when 50 per cent of the population lacks clean water to wash their hands.

“Tackling COVID-19 on top of the existing humanitarian emergency requires urgent action”, he stressed. “We must preserve the major humanitarian aid operation that is already underway – the world’s largest – while developing new public health programmes to fight the virus and strengthen healthcare systems” – all of which requires financing.

Aid agencies estimate the need for up to $2.41 billion to cover essential lifesaving aid until the end of the year, including programmes to counter COVID-19.

“There is no time to lose”, said Mr. Guterres.

Highlighting that civilian casualties have risen each month throughout the year, and more than 500 people have been killed or injured since January, Mr. Guterres echoed his call for a ceasefire, maintaining that ending the war is “the only way” to address the country’s health, humanitarian and human development crises.

“The situation in Yemen is catastrophic”, he asserted, explaining that the coronavirus is “spreading rapidly”, with data suggesting “a much higher rate of severe illness and death than in many other countries”.

Updating that overcrowded, under-stocked health facilities are turning people away, he said: “This is what more than five years of war have done to Yemen. The health system is in a state of collapse”.

And yet so far, the world has offered less help than it did last year.

The UN and its partners are delivering humanitarian assistance to more than 10 million people across the country every month, which has “helped bring Yemen back from the brink of famine, curb the largest recorded cholera outbreak in history and support families fleeing violence”, said the relief chief

Aid agencies are also racing to contain COVID-19 as the UN is supporting rapid response teams in all districts, importing essential supplies to help millions protect themselves.

“Delivering aid in Yemen is never easy, and we need much more from everyone if we are to continue this work”, said the UN relief chief.
He made it clear that “the biggest challenge is the money”.

More than 30 of the 41 UN-supported programmes in Yemen, will close in a few weeks if additional funds are not secured.

Upholding that “pledges will not save lives unless they are paid”, Mr. Lowcock pointed out that so far, most have not been honoured.
He painted a picture of Yemen “on the precipice, right on the cliff edge, below which lies a tragedy of historic proportions”, and asked that everyone match their pledges of last year and to pay promptly and flexibly so that aid agencies can focus on where the needs are greatest.

He cautioned against cutting funding to any one part of the country because of who is in control, saying that is “tantamount to the collective punishment of the innocent and the vulnerable, people who have no say on who is in charge in the places they live”.

Sharing the gavel, Prince Faisal bin Farhan Al Saud, Foreign Minister of Saudi Arabia said that his country “supports the UN efforts to reach a political solution in Yemen to alleviate the suffering and support humanitarian, economic and developmental aspects”.

Riydah has pledged around $500m in support of the UN’s humanitarian response plan for Yemen, and he highlighted that the country has so far provided more than $16 billion in aid to its neighbour.

At the end of the conference, Mr. Lowcock repoted the $1.35 billion dollars had been pledged. 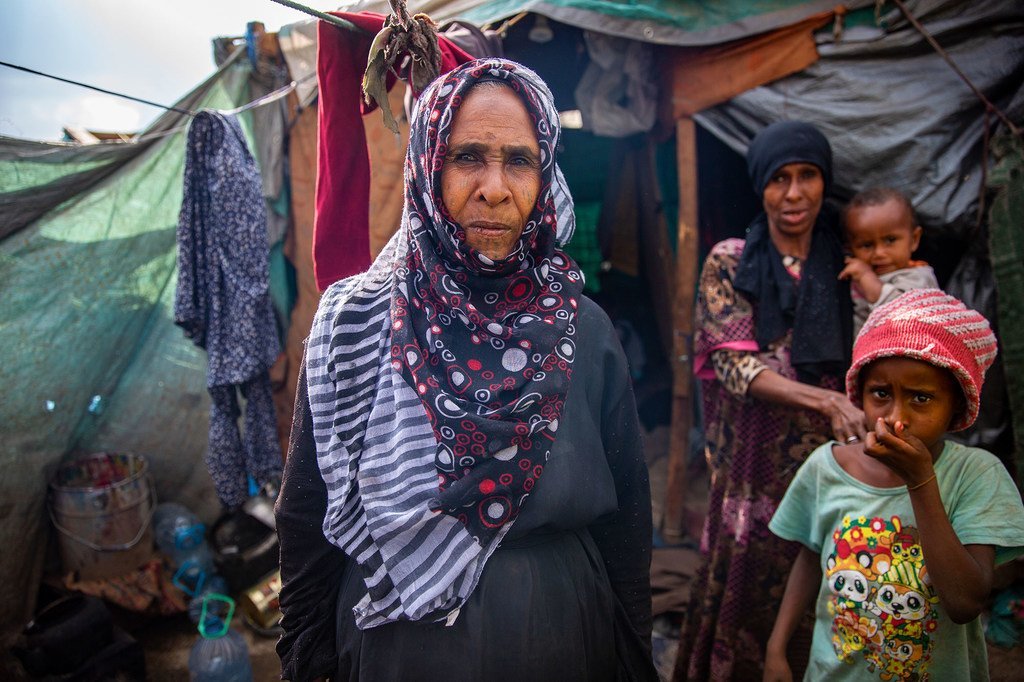 IOM/O. Headon
A displaced Yemeni woman stands outside a makeshift shelter that she shares with her extended family.
♦ Receive daily updates directly in your inbox - Subscribe here to a topic.
♦ Download the UN News app for your iOS or Android devices. 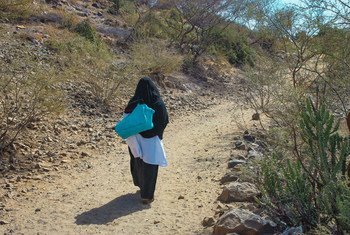 In mid-May, just as the COVID-19 pandemic arrived in Yemen, funding for UNFPA’s life-saving reproductive health services dried up. The agency has been forced to suspend the provision of reproductive healthcare in 140 out of the 180 health facilities, it supports, meaning only 40 now remain. 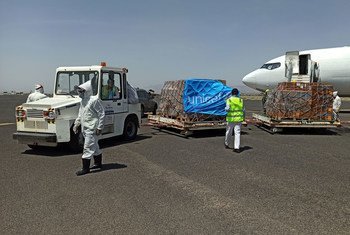 A plane chartered by the UN Children’s Fund (UNICEF) landed at Sana’a airport on Saturday with lifesaving supplies to help curb the spread of COVID-19 in conflict-torn Yemen.