The global coronavirus pandemic is testing the multilateral system like never before and the Security Council must stop the “infighting”, and step up to the challenge, the European Union’s foreign policy chief told the 15-member body on Thursday.

Josep Borrell said the novel coronavirus crisis – like climate change – shows the need for collective action and that the rules-based international order, with the UN at its core, must be upheld and strengthened.

“At a time of global crisis, we need a Security Council able to take the necessary decisions and not one that is paralyzed by vetoes and political infighting”, said Mr. Borrell, the EU’s High Representative for Foreign Affairs and Security Policy.

He added: “The world needs a revitalized multilateral system, but this will only happen if we all invest in it.  This, the EU is doing.  We count on those who sit on the Security Council to do their part.”

In a wide-ranging briefing at the start of a Council debate on UN-EU cooperation, Mr. Borrell said that the 27-nation bloc is doing “whatever it takes” to combat the COVID-19 crisis.

But he emphasized that the battle at home can only succeed if the virus is defeated in every corner of the world.

He expressed agreement with Secretary-General António Guterres, that socio-economic recovery packages must aim to “build back better” by investing in sustainable and resilient societies, emphasizing that human rights must also be fully respected.

“The COVID-19 crisis has laid bare the fragilities of a hyper-globalized and interdependent world”, he said.

“We must learn the wider lessons and take seriously how human health and planetary health are linked and how existing inequalities are making us more vulnerable.”

In that regard, he supported efforts by Germany, which assumes the Council presidency in July, to put the climate and security nexus on the Council’s agenda.

On UN-EU cooperation, he said that the bloc remains a staunch supporter of a strong United Nations “as the beating heart of the multilateral system” and that its member nations – who are collectively the biggest contributor to the UN budget – fully support the Secretary-General’s blueprint for reforming the Organization.

Describing Africa as Europe’s “sister continent,” he warned that the situation in the vast Sahel region, is deteriorating “at an alarming pace” and that the UN, the EU, the African Union and the Group of Five Sahel countries, must do more and do better.

Libya represents a major crisis at Europe’s doorstep, he added, describing as surreal images of combatants shooting at each other while wearing masks to protect themselves from the deadly coronavirus.

In that regard, he said that the EU’s newly launched Operation Irini in the Mediterranean - tasked with implementing the UN arms embargo – is already sharing valuable information with the UN Panel of Experts on Libya while also deterring oil smuggling.

Turning to the Middle East, Mr. Borrell urged the Council to renew authorization of cross-border humanitarian operations into north-west Syria and not to “play political games” with Syrian lives.

Syria on the agenda in Brussels

The fourth Brussels Conference on Syria on 29 and 30 June, will be an opportunity to demonstrate continued support to the Syrian people while also consolidating international support for a political solution to the crisis, he added.

He went on to underscore the EU’s support for Ukraine’s national sovereignty and territorial integrity in the face of the Russian Federation’s annexation of Crimea and unfulfilled Minsk commitments.

Mr. Borrell also expressed “deep concern” with China’s approval of proposed national security legislation for Hong Kong, saying it does not conform with international commitments nor with the Special Administrative Region’s Basic Law.

♦ Receive daily updates directly in your inbox - Subscribe here to a topic.
♦ Download the UN News app for your iOS or Android devices.
European Union|coronavirus|COVID-19|security council 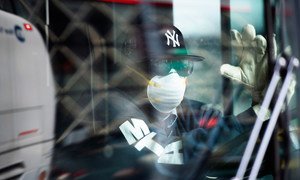 Transforming the transport sector to be more environmentally-friendly in the aftermath of the COVID-19 pandemic, could create up to 15 million new jobs worldwide and help countries move to greener, healthier economies, according to a UN-backed report published on Tuesday. 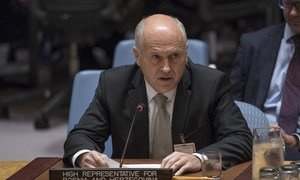