UN Photo/Hervé Serefio
The protection of civilians is a key mandate for many United Nations peacekeeping operations including in the Central African Republic.

Citing conflict as one of the greatest causes of that fragility, Secretary-General António Guterres told a high-level videoconference on the protection of civilians in armed conflict that the coronavirus is causing “enormous human suffering” and additional stress to vulnerable health systems, economies and communities already been weakened by years of armed conflict.

“COVID-19 is not only spreading sickness and death; it is pushing people into poverty and hunger,” he explained, adding that in some cases, “it is reversing decades of development progress”.

Meanwhile, as access to services is curtailed and repressive measures are adopted by some nations, protecting the most vulnerable, particularly in conflict zones, has become even more difficult.

Moreover, COVID-19 threatens refugees and internally displaced people crowded together in camps and communities that lack sanitation and healthcare facilities.

Mr. Guterres referred to his call in March for a global ceasefire to respond to the pandemic, saying that while well received, it “has not been translated into concrete action” and  maintained that in some cases, the pandemic may even create incentives for warring parties to press their advantage or strike while international attention is focused elsewhere.

“Both scenarios could lead to increases in violence. And civilians always pay the price,” stated the UN chief.

Turning to peacekeeping, he called UN blue helmets “one of the most effective means of protecting civilians in conflict zones around the world”, noting their support to national authorities by protecting healthcare and humanitarian workers and facilitating access to aid and protection.

Against the backdrop of little progress on international law compliance; more than 20,000 civilians casualties in just ten conflicts; tens of thousands of children recruited into hostilities last year; millions of displaced people; women and girls subjected to “appalling levels of sexual and gender-based violence”; the disproportionate impact on people with disabilities; and conflict as “the main driver of global hunger”, the Secretary-General painted a gloomy picture on the protection of civilians.

“Violence against humanitarian workers and assets was widely reported”, the UN chief added.

“This month’s attack on a maternity hospital in Kabul, in the middle of a major global health crisis, makes it even more essential for Member States to take urgent measures to implement Security Council resolutions and protect the provision of medical care in conflict”, he underscored.

In closing, Mr. Guterres stressed the need to do more to prevent, reduce and resolve conflicts as well as ensure compliance with international law and accountability.

“Sustainable political solutions remain the only way to ensure that civilians are kept safe from harm”, concluded the Secretary-General.

The President of the International Committee of the Red Cross (ICRC), Peter Maurer, set out a detailed list of concerns to the Council, from the rising number of displaced people and the rapid spread of hate speech, to the shrinking space for neutral humanitarian work and the behavior of belligerents and those who support them.

In particular, he cited “the devastating impacts for civilians when explosive weapons with a wide impact area are used in populated areas”.

He called on the Council to ensure that its response in all situations are guided by “the utmost respect for the protection of civilians” and respect for “the dignity and rights” of people.

“Unless we end these ongoing conflicts, any semblance…of addressing the inequities and injustices, which have often fueled the conflict, as prerequisites for development transformation, cannot be met”, she asserted.

The Elder spoke at length about the need for the Security Council to be “broadened and strengthened” to reflect changes in the world.

“Where individual members are holding the Council back, by narrow self-interest and the…veto power, we must find a worldwide formula to preserve the collective interest”.

She upheld that the UN, “especially the Security Council” represents “hope for peace”.

“We must find the political commitment, long absent…and act now”, she told the 15-member organ.

While acknowledging that “a conflict averted does not make headlines,” Ms. Sirleaf echoed the Secretary-General in concluding that “the most effective way to protect civilians is to prevent the outbreak”. 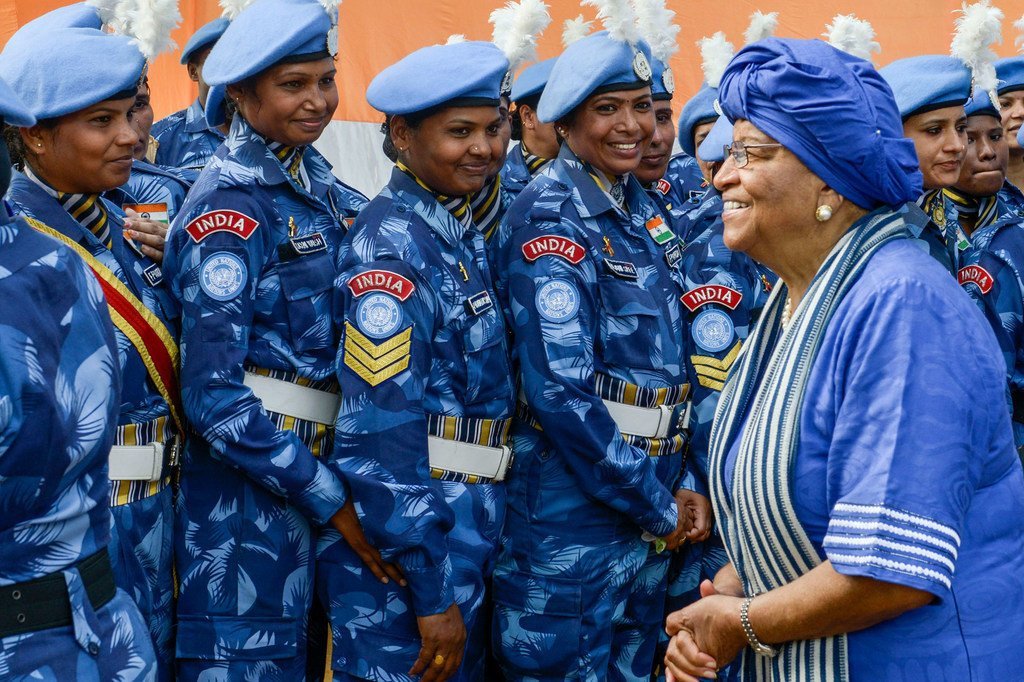 Emmanuel Tobey/UNMIL
Then President Ellen Johnson-Sirleaf with members of the all-female Indian Formed Police Unit serving with the UN Mission in Liberia. (file)
♦ Receive daily updates directly in your inbox - Subscribe here to a topic.
♦ Download the UN News app for your iOS or Android devices. 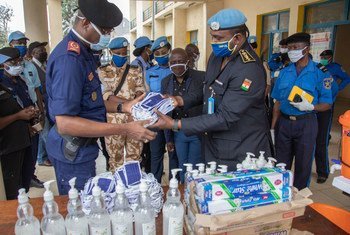 Policing the pandemic: how UN Police are maintaining law, order, and public health

In several countries afflicted by years of armed conflict, The UN assists with law and order issues, including policing expertise. This work is being challenged, as never before, by the COVID-19 pandemic. In this interview with UN News, Luis Carrilho, head of the UN Police Division, describes how the virus is affecting the ability of his colleagues to keep the peace. 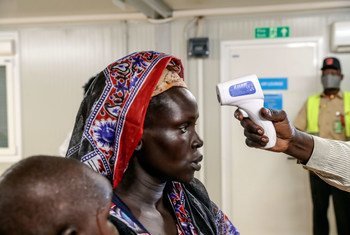