© UNICEF/Alajandra Pocaterra
During the COVID-19 pandemic, food kits are delivered to prioritized communities in Venezuela.

Negotiations remain the only way to overcome the ongoing political deadlock in Venezuela, especially given the potentially far-reaching impact of the COVID-19 pandemic, a senior UN official told the Security Council on Wednesday.

“Venezuela is mired in a deepening protracted crisis that only Venezuelans can resolve,” said Rosemary A. DiCarlo, Under-Secretary-General for Political and Peacebuilding Affairs.

Despite significant international facilitation efforts, attempts at reaching a negotiated solution have failed to bear fruit, she said, briefing the 15-member organ on the situation in the Latin American nation.

Reiterating the Secretary-General’s oft-repeated call for a negotiated solution among Venezuelans – with United Nations help if requested – she said that talks among the country’s main political actors remains the only way forward.

“In the face of the COVID-19 pandemic, an agreement that strengthens democratic governance, with full respect for human rights and the rule of law, is more urgent than ever,” she said, urging Member States to stand behind that call.

Venezuela is in the midst of an economic meltdown and a dire humanitarian crisis that has prompted 5.1 million Venezuelans to go abroad – mostly to other Latin American and Caribbean countries - as refugees and migrants, as a power struggle between President Nicolás Maduro and opposition leader Juan Guaidó drags on.

The Russian Federation requested Wednesday’s meeting, the Council’s third on Venezuela since 22 April.  It was conducted via video-teleconference due to COVID-19 measures at UN headquarters.

Ms. DiCarlo said that before the novel coronavirus pandemic erupted, the National Assembly’s application committee – the only formal space that brought together Government and opposition legislators – was poised to lay the groundwork for legislative elections later this year.

Opposition members want presidential elections to be held concurrently, she noted, calling on the main political actors to create suitable conditions for a credible, inclusive and participatory vote.

Enveloped in the coronavirus

On the pandemic, she said that “more funding is urgently needed” to meet a request for $750 million to cover the humanitarian needs of the most vulnerable Venezuelans under the UN’s COVID-19 Global Humanitarian Response Plan.

At the same time, she noted that the Office of the High Commission for Human Rights has received reports of the detention of political leaders and journalists reporting on the pandemic, as well as threats and intimidation against health workers who express concern about a lack of medical supplies or who discuss the number of cases.

In its latest situation report, the World Health Organization (WHO) reported a total of 618 confirmed cases in Venezuela and 10 deaths.

Politicization of humanitarian aid remains a major concern, the Under-Secretary-General said, adding that nationwide fuel shortages – which the Government attributes to unilateral sanctions – is constraining the work of humanitarian organizations trying to sustain their COVID-19 response.

Going forward, she said the UNsystem will continue to strengthen its human rights and humanitarian action in the country as well as its response in support of Venezuelan refugees and migrants outside .

Ms. DiCarlo also noted that the Government of Venezuela sent a letter to the Security Council earlier this month statinf that “armed groups of mercenaries and terrorists” illegally entered the country on 3 and 4 May in an attempt to assassinate President Maduro and other high officials.  She added that Colombia, the United States and Mr. Guaidó have all denied Government allegations of involvement.

In a joint statement on 6 May, three UN human rights experts asked President Maduro’s government to explain how it intends to support the Venezuelan people, “many of whom are teetering on the brink of survival”. 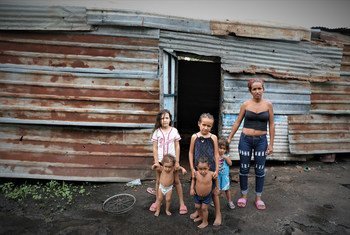 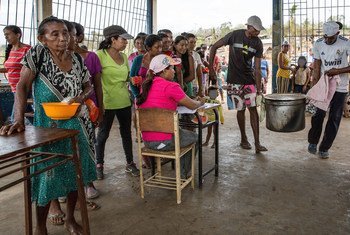 Hyperinflation in Venezuela means that roughly one-third of the population – more than nine million people – do not get enough to eat and are in need of assistance, according to estimates published on Tuesday by the World Food Programme (WFP).