UNICEF/Ayene
In Ethiopia, a nine-year-old child carries jerry cans filled with water to her home, four kilometers away from the borehole.

UN chief António Guterres is encouraging Egypt, Ethiopia and Sudan to persevere with efforts to overcome their differences and reach agreement on the Grand Ethiopian Renaissance Dam.

Through his spokesperson, the Secretary-General noted on Tuesday that “good progress” is being made in negotiations between the three countries in hopes of achieving a mutually beneficial agreement.

Going up along the Blue Nile near the border with Sudan, and under construction since 2011, the $4.5 billion dam – also known by its acronym GERD - will be Africa’s biggest hydroelectric power plant once completed.

Negotiations centre on the pace at which Ethiopia fills the 74 billion cubic metre reservoir behind the dam and the impact that could have on water supplies downstream in Sudan and Egypt.

Ethiopia is keen to start filling the reservoir in July.

“The Secretary-General underscores the importance of the 2015 Declaration of Principles on the GERD, which emphasizes cooperation based on common understanding, mutual benefit, good faith, win-win, and the principles of international law,” the spokesman said.

“The Secretary-General encourages progress towards an amicable agreement in accordance with the spirit of these Principles,” he added.

Cairo, Addis Ababa and Khartoum have all indicated their willingness to resume discussions, but differences linger over the appropriate mechanism for such talks.

UN experts say that Egypt wants to put international pressure on Ethiopia to agree to a proposal - put forward by the United States and World Bank - on the dam’s first filling and annual operation.

But Ethiopia is rejecting that idea as severely limiting the dam’s capacity to generate electricity and curtailing rights to future upstream development, among other reasons.

Egypt also insists that Ethiopia must not start filling the reservoir until an agreement is reached, in line with its interpretation of the Declaration that Ethiopia is contesting.

The Secretary-General encourages progress towards an amicable agreement -- UN Spokesperson

The Declaration, signed in March 2015, outlines the parties’ commitment to cooperation and to resolve differences through negotiations. It also states that if a dispute cannot be resolved, the matter can be referred to the heads of State and Government with an option for a joint request for mediation.

Ethiopia favours resolving the dispute at the trilateral level and has historically been against internationalizing the issue, seeing no mediation role for the United Nations.

On 13 May, Sudan’s Ministry of Irrigation said that the country could not agree to an Ethiopian proposal on the initial filling as it failed to address longer-term technical, legal and environmental issues.

According to news reports, Egypt also dismissed the Ethiopian proposal on the initial filling, writing a letter to the Security Council on 1 May calling on Ethiopia to respect its obligations and resume talks. 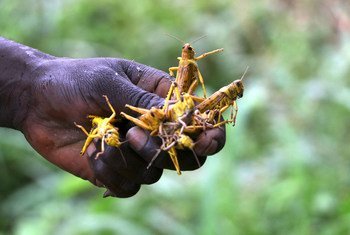