The International Organization for Migration (IOM) launched an urgent $7 million appeal on Thursday, to ease the impact of COVID-19 on migrant communities in five Central Asian countries and the Russian Federation, where the pandemic is pushing a growing number of migrant workers into poverty.

The appeal aims to help thousands who are stranded in Kazakhstan, Kyrgyzstan, the Russian Federation, Tajikistan, Turkmenistan and Uzbekistan.  It was launched virtually by more than 100 representatives from donors, embassies, migration experts and Governments, together with senior IOM staff in Vienna, Moscow, Nur Sultan and other regional capitals.

The advance of the new coronavirus is dramatically transforming the social and economic face of a region, that accounts for one-sixth of the world’s surface, and recovery will take years.

Remittance flows - the lifeblood of several regional economies - has slowed to a trickle, IOM says.  Hundreds of thousands of jobs also have been lost abroad, with millions of families in danger of slipping rapidly into extreme poverty.  Those migrants who do make it home, are returning to joblessness, stigma, and potentially, social unrest.

In one of the world’s most mobile regions, where millions migrate for work between Central Asia and the Russian Federation, more than 80 per cent of migrants surveyed by IOM and its partners, report either a reduction or total loss in their incomes.

Huge resources are needed simply to provide health care for the sick and ensure measures are taken to flatten the curve.

“We know from previous crises that migrants are ruthlessly exploited, by having their wages cut or being threatened with being reported to the authorities,” said Dyane Epstein, IOM’s Regional Director for South-Eastern Europe, Eastern Europe and Central Asia. “Some will be forced into the shadow economy, where they are further exploited, compromising their physical and mental health.”

IOM plans to provide support to Governments and communities dealing with the impact of disruption to labour markets and severely reduced remittance flows.  “Our initial research shows that over 90 per cent of labour migrants will be unable to send remittances home,” warned IOM Sub-Regional Coordinator for Central Asia, Xeynal Hajiyev.  “They have no savings and the industries they depend on are mothballed.”

Millions ‘teetering on the brink’

IOM Chief of Mission for the Russian Federation, Abdusattor Esoev, agreed that this represents a clear and present crisis. With 60 per cent of migrants unable to pay their rent and more than 40 per cent unable to afford food, “millions of people are teetering on the brink,” he said.  “We can provide a safety net but the time to act is right now.”

Funds raised through the appeal will provide migrants – especially women and children stranded in destination and transit countries (Russia, Kazakhstan, and Turkey) with safe living conditions, information on COVID-19, protective masks and sanitizers, and access to health screening and online education for children.

IOM will also assist Central Asian migrants in returning to their homelands, reintegrating into their home communities and seeking alternative employment across the region.

According to the World Health Organization (WHO), as of Friday, the Russian Federation has confirmed 252,245 cases of COVID-19 since 31 January; 2,305 people have died.

In Kazakhstan, 5,571 people have been infected and 33 people have died, according to WHO, while Kyrgyzstan has registered 1,082 confirmed cases and 12 deaths.

There are 729 cases in Tajikistan and 23 people have died from COVID-19. In Uzbekistan, the virus has infected 2,620 people and caused 11 deaths.  WHO has not confirmed any COVID-19 infections or deaths in Turkmenistan, as of 15 May. 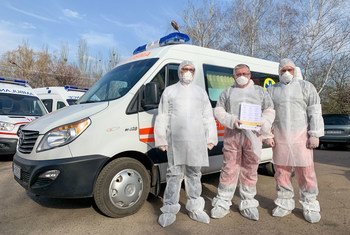 A United Nations project to promote energy efficiency among Ukrainian homeowners has found a second life – informing 1.8 million of the nation’s citizens on how to combat the COVID-19 virus.