Photo: UNEP
(FILE PHOTO) Toxic and life-threatening chemicals can enter the environment through industrial and urban discharges, agricultural run-off and the burning and release of waste.

Last week’s deadly toxic gas leak at a Korean-owned polymer plant in south-eastern India, is a grim wake up call for the chemical industry to acknowledge and fulfil its responsibility to respect human rights, the UN independent expert who monitors the issue, said on Thursday.

Twelve people reportedly died and more than 1,000 fell sick after styrene leaked from the LG Chem plant near Visakhapatnam, in Andhra Pradesh state, on 7 May.

Styrene is used to make plastics, but it can also cause cancer and neurological damage. It can also harm reproduction and its impacts may go unnoticed for years after exposure.

“The latest disaster has rightly drawn parallels to the toxic gas leak that killed thousands in Bhopal, India, in 1984”, said Baskut Tuncak, Special Rapporteur on hazardous substances and wastes.

“It also illustrates the range of human rights infringements brought by our rampant consumption and production of plastics”, he said, welcoming the start of an investigation and possible homicide charges.

In a statement, he recalled that the Visakhapatnam and Bhopal incidents both involved trans-national corporations – LG Chem, based in the Republic of Korea, more often known as South Korea, and Union Carbide of the United States, in the case of Bhopal.

“It is yet another reminder that around the world, mini-Bhopal chemical disasters continue to unfold with shocking regularity”, Mr. Tuncak said.

Reiterating his call last year on the 35th anniversary of the Bhopal disaster for the industry to implement human rights due diligence, he urged authorities to be fully transparent and ensure those responsible are held to account.

“I am concerned about ensuring that the victims of exposure who develop diseases or disabilities later in life are provided an effective remedy”, Mr. Tuncak continued.

“I urge Indian and South Korean authorities, and the businesses implicated, to avoid the same mistakes and abuse of judicial procedures that have denied justice to the victims of the Bhopal disaster, who are still suffering to this day.”

In the wake of the Bhopal disaster, the global chemical industry adopted a Responsible Care initiative in an effort to prevent further human rights abuses by chemical manufacturers.

“Yet this industry initiative’s principles contain no mention of human rights and fail to require that industry respects human rights in practice as required under the United Nations Guiding Principles on Business and Human Rights”, the Special Rapporteur said.

Endorsing his appeal was the Human Rights Council’s five-member Working Group on the issue of human rights and transnational corporations and other business enterprises, as well as Danius Pūras, UN independent rights expert on human rights and the environment.

News reports say that LG Chem has sent an eight-member team to India to investigate the gas leak.

The plant used styrene monomer to make polystyrene products which would go on to become consumer items such as cups, cutlery and electric fan blades. 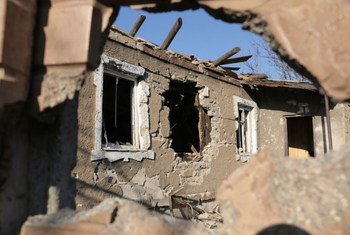 10 March 2017
Unless the fighting in eastern Ukraine is stopped and precautions are taken to secure industrial facilities in the area, the armed conflict could lead to a catastrophic chemical disaster, an independent United Nations human rights expert today warned.