Help is needed urgently to distribute vaccines worldwide amid dramatic shortages because of COVID-19 restrictions, the UN Children’s Fund (UNICEF) said on Friday. It has warned that youngsters’ lives “are at stake” owing to the dramatic decline in commercial flights and limited availability of charters.

Governments, the private sector, the airline industry, and others have been approached to free up freight space at an affordable cost, “and to work with us to find ways around the transport disruptions we face”, said UNICEF spokesperson Marixie Mercado.

"Children’s lives are at stake.”@UNICEF is calling for support to unblock a massive backlog in #vaccine shipments due to unprecedented logistical constraints related to #COVID19 lockdowns in some countries. pic.twitter.com/igqyZmG1kx

“Compounding the challenge is the exorbitant cost of securing flights, with freight rates at 100 to 200 per cent above normal and charter flights even more costly,” she explained. “Countries with limited resources will struggle to pay these higher prices, leaving children vulnerable to vaccine-preventable diseases such as measles and polio.”

Last year, UNICEF sourced more than 2.4 billion doses of vaccines for 100 countries, to reach around half of the world’s under-fives.

But since late March, there has been a 70 to 80 per cent reduction in shipments.

Dozens of countries are now at risk of running out of supplies including at least five countries that experienced measles outbreaks in 2019.

They include the Democratic Republic of the Congo – a country fighting its largest ever Ebola outbreak – where measles caused more than 6,000 deaths last year.

The 26 countries most at risk include Benin, Niger, Tajikistan, Cambodia, Mongolia and Solomon Islands. As part of World Immunization Week, ending on Friday, the World Health Organization (WHO) warned about the danger of even more major measles outbreaks, as part of a wider alert on routine immunization programme delays.

Latest data indicates that the number of measles cases worldwide last year was likely in the millions.

If routine measles vaccination programmes backslide as a result of COVID, “we could see even more outbreaks around the world than we saw last year, an even greater number of cases and even greater number of deaths,” said Dr Kate O’Brien, Director of the Immunization, Vaccines and Biologicals Programme at WHO.

Listen below to our in-depth podcast on the importance of maintaining the programmes during the coronavirus:

Progress in lifesaving work at risk

Notwithstanding the COVID-19 pandemic, most countries have made immense progress in ensuring that children are vaccinated in recent decades.

In 2018, 86 per cent of children under the age of five globally were vaccinated with three doses of diphtheria, tetanus and pertussis (DTP3), according to WHO.

Youngsters also received one dose of the measles vaccine, up from 72 per cent in 2000 and 20 per cent in 1980. The number of children paralyzed by polio has been reduced by 99.9 per cent worldwide, the UN health agency said in a statement.

All children should be immunized against these five highly infectious diseases, WHO says, along with the main causes of meningitis, pneumonia and diarrhoea.

“Every child should receive every dose that they need and receive those doses on time to give them the best protection possible,” said Dr. O’Brien.

Regional vaccines are also provided in parts of the world where yellow fever is prevalent, and some countries also vaccinate against tuberculosis using a vaccine called BCG.

Every girl in the world should also receive the HPV vaccine against cervical cancer, Dr O’Brien told UN News.

♦ Receive daily updates directly in your inbox - Subscribe here to a topic.
♦ Download the UN News app for your iOS or Android devices.
World Immunization Week|vaccines|coronavirus|COVID-19

COVID-19 vaccine: UNICEF to stockpile more than half a billion syringes by year’s end 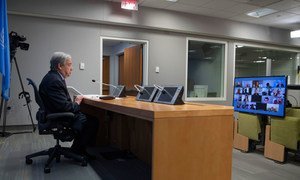 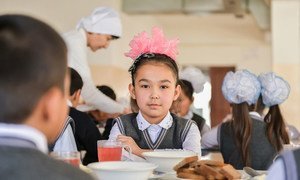 With classrooms closed due to the COVID-19 pandemic, two UN agencies are urging governments to act now to shore up the futures of the 370 million children worldwide who depend on school meals.