A group of 13 independent UN human rights experts on Thursday called on the UN chief, António Guterres, to “urgently step up efforts” to fulfill a UN pledge to help victims of a nine-year-long cholera epidemic in Haiti that killed over 10,000 citizens.

“The importance of relief is even more urgent in light of the COVID-19 pandemic, which could deal a double blow to victims of the cholera outbreak and their families”, the experts said. “We recognise the immense challenges all actors face in responding to the coronavirus, but this new threat cannot mask past failures and ongoing violations.”

🇭🇹 A group of independent UN rights experts calls on UN Secretary-General António Guterres to urgently step up efforts to fulfill a United Nations pledge to help victims of a cholera epidemic in #Haiti that killed over 10,000 victims: https://t.co/9SATEu9ZFZ pic.twitter.com/4KVLfuMlEf

The Independent Experts, Special Rapporteurs and Working Groups are part of what is known as the Special Procedures of the Human Rights Council. They work on a voluntary basis; they are not UN staff and do not receive a salary for their work. They serve in their individual capacity.

UN has ‘failed to pay any compensation’

The experts said in their joint statement, that more than three years ago, the UN acknowledged the role played by its peacekeepers in causing the epidemic.

“It has since failed to pay any compensation and its subsequent underfunded aid effort has amounted to little more than a spate of symbolic development projects”, they added.

“Serious shortfalls in funding and expenditures make the UN’s promises illusory. Despite initially seeking $400 million over two years, the UN has raised a mere $20.5 million in about three years and has spent a pitiful $3.2 million. This is a deeply disappointing showing following the loss of 10,000 lives,” they said.

They also raised concerns about the UN’s decision to help people affected by cholera through community assistance rather than direct support. “Some victims prefer monetary payments, an option that was once on the table, but the UN has foreclosed that possibility seemingly without carrying out consultations or producing a detailed feasibility assessment,” said the experts. “Compensation is ordinarily a central component of the right to an effective remedy, and development projects are simply not a replacement for reparations”.

In a 2016 report to the UN General Assembly, the Special Rapporteur on extreme poverty and human rights, Philip Alston, called on the UN to accept its legal responsibility for the outbreak and provide appropriate remedies.

“Many of these shortcomings result from the UN’s admission of its ‘moral responsibility’ but not its legal one”, said the experts. “Asking UN Member States to make a charitable contribution is entirely different from payments linked to a legal obligation,” they added.

The experts have relayed their concern to both the UN Secretary-General and the Government of Haiti.

Responding to the independent experts, UN Spokesperson, Stéphane Dujarric, confirmed receipt of the letter, saying that the Organization was “reviewing the concerns raised, and would be “responding in due course”.

Since taking office, the Secretary-General has been strongly committed to supporting the people of Haiti and the fight against cholera

“Since taking office, the Secretary-General has been strongly committed to supporting the people of Haiti and the fight against cholera. He reiterates the United Nations’ deep regrets for the loss of life and suffering caused by the cholera epidemic.”

In 2016, a formal New Approach to Cholera in Haiti was launched, together with the Government, to defeat cholera in the Caribbean nation, leading to progress, said Mr. Dujarric:

“Haiti has not had a single laboratory confirmed case of cholera in nearly 15 consecutive months. The Secretary-General welcomes this significant progress towards eliminating the disease”, he added. “Efforts are now accelerating to achieve another important milestone: three years with no laboratory confirmed cases of cholera, the time required to declare Haiti cholera-free. The two-track approach prioritizes the emergency response to eliminate the transmission of cholera, and support for those most affected by the disease.”

Since the beginning of the outbreak, the Spokesperson said, the international community has invested over $705 million to fight cholera, in support of the Government’s National Plan, including more than US$139 million mobilized by the UN and its agencies. “Investments made in Haiti’s health, epidemiological, water and sanitation systems to combat the disease are now playing a key role in fighting the COVID-19 pandemic”, he added.

“The United Nations remain committed to helping Haiti and its people build a brighter future.  The Secretary-General urges Member States to demonstrate their solidarity with the people of Haiti by increasing their contributions to eliminate cholera and provide assistance to those affected.” 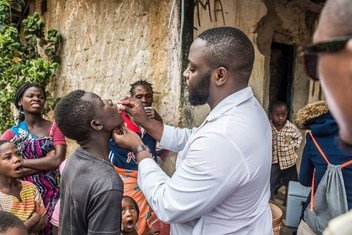 After a nine-year long cholera outbreak in Haiti that killed close to 10,000 people, this week the country reached the milestone of an entire year free from any new cases of the deadly waterborne disease.