©UNICEF/Fouad Choufany
A nurse takes a girl’s temperature at a Primary Health Care Centre in Beirut, Lebanon, during the COVID-19 outbreak.
16 April 2020
Health

The looming global recession resulting from the COVID-19 pandemic could cause hundreds of thousands of additional child deaths this year, effectively reversing recent gains in reducing infant mortality, a new UN report issued on Thursday has revealed.

In a statement on the new findings, UN Secretary-General António Guterres called for urgent action to support the world’s children amid the universal crisis.

“Thankfully, children have so far been largely spared from the most severe symptoms of the disease. But their lives are being totally upended”, he said.

“I appeal to families everywhere, and leaders at all levels: protect our children.”

The report finds that the socio-economic impact of the pandemic, together with measures to mitigate the spread of the new coronavirus, could potentially be catastrophic for millions of children worldwide.

It details how the crisis is putting young lives at risk in key areas that include education, food, safety and health.

Practically all students worldwide are now out of school because of the pandemic.

©UNICEF/JC McIlwaine
A playground at an elementary school in Ridgefield, in the US state of Connecticut, sits empty following temporary school closures.

The report stated that the losses in learning today, and in their future development, are hard to fathom.

“Some schools are offering distance learning, but this is not available to all”, the Secretary-General said, adding that children in countries with slow and expensive Internet services are severely disadvantaged.

Millions missing out on school meals

Child nutrition is another vital concern, according to the report.

The UN chief recalled that even before the pandemic, childhood malnutrition and stunting were at unacceptable levels.

With classrooms shuttered, the nearly 310 million children worldwide who rely on school meals are missing out on this daily dose of nutrition.

Safety at home and online

Sixty per cent of all children worldwide are living in countries that have implemented full or partial lockdowns, according to the report.

As the crisis deepens, family stress-levels also are rising, and children confined at home are both victims and witnesses of domestic violence and abuse.

School closures also mean the loss of what the UN chief called “an important early warning mechanism” for incidents.

“There is also a danger that girls will drop out of school, leading to an increase in teenage pregnancies”, he added.

Earlier this week, the UN Children’s Fund (UNICEF) and partners reported that with more children relying on technology for learning and socializing, the risk of online abuse and exploitation is rising.

Though coronavirus infection rates so far have been “far milder” among children, the report found the broader effects of the crisis on child health are significant.

Hospitals and health facilities overwhelmed with COVID-19 patients are making it difficult for children to access standard care.

We cannot leave children vulnerable to disease. As soon as immunizations can resume, every child in need must be vaccinated.https://t.co/G7wgKAZxaQ

Families out of work, or otherwise experiencing reduced incomes, are forced to cut back on essential health and food expenditures, which particularly affects children, women and breastfeeding mothers.

“With the global recession gathering pace, there could be hundreds of thousands of additional child deaths in 2020”, the Secretary-General warned.

This scenario would effectively reverse progress made in reducing infant mortality over the past two to three years.

“And this alarming figure does not even take into account services disrupted due to the crisis – it only reflects the current relationship between economies and mortality, so is likely an under-estimate of the impact,” said the report.

While the COVID-19 crisis is unprecedented, it is also an opportunity for “unprecedented international solidarity” for children and humanity.

Governments are urged to take steps to counter the unintended effects on children by rolling out or expanding social assistance to families, securing food supply chains and local food markets, and prioritizing the continuity of services such as schooling, nutrition programmes, and maternal and newborn care.

The report further recommends specific protections for the most vulnerable children, such as migrants, refugees, minorities, children with disabilities, and those living in slums.

Standard strategies for physical distancing and lockdowns should be adapted in places such as low-income settings in urban areas, refugee camps and conflict zones.

The report underlined that the UN is working across all settings and stands ready to support countries striving to invest in the world’s youngest generation.

Said the Secretary-General: “With the pandemic placing so many of the world’s children in jeopardy, I reiterate my urgent appeal: let us protect our children and safeguard their well-being.”

♦ Receive daily updates directly in your inbox - Subscribe here to a topic.
♦ Download the UN News app for your iOS or Android devices.
secretary-general|Children|COVID-19|coronavirus 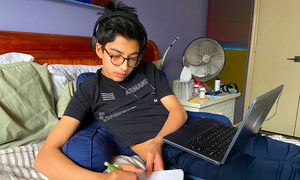 Self-isolation has driven more and more children to move online during the COVID-19 pandemic, leading to an unprecedented rise in screen time and raising safety risks for millions of young people, the UN said on Tuesday. 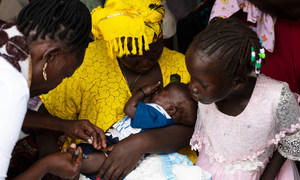 As countries around the world continue to battle the COVID-19 pandemic, more than 117 million children risk missing out on measles vaccines, two UN agencies warned in Geneva on Tuesday.