The World Health Organization (WHO) is working with countries on strategies to "gradually and safely" ease stay-at-home restrictions aimed at containing the spread of the new coronavirus, agency chief Tedros Adhanom Ghebreyesus told journalists on Friday, though he cautioned against any sudden action.

"WHO wants to see restrictions lifted as much as anyone", he said.

"At the same time, lifting restrictions too quickly could lead to a deadly resurgence. The way down can be as dangerous as the way up if not managed properly".

Tedros laid out six factors for consideration, which include that transmission is controlled and sufficient public health and medical services are available.

Outbreak risks in settings such as long-term care facilities also need to be minimized, while workplaces, schools and other essential locations should have preventive measures in place.

"Fifth, that importation risks can be managed," he continued, "and sixth – and I cannot over-emphasize this point – that communities are fully aware and engaged in the transition. Every single person has a role to play in ending this pandemic".

Meanwhile, some countries are reporting that more than 10 per cent of their health workers have been infected by the new coronavirus, indicative of what Tedros described as "an alarming trend".

Evidence from China, Italy, Singapore, Spain and the United States shows that some infections are occurring outside health facilities, so at home or in communities.

Factors for infection in health settings include late recognition of COVID-19 and lack of training or experience in dealing with respiratory pathogens. Many health workers are also being exposed to large numbers of patients during long shifts with inadequate rest periods.

"However, the evidence also shows that when health workers wear personal protective equipment the right way, infections can be prevented", said Tedros.

"That makes it even more important that health workers are able to access the masks, gloves, gowns and other PPE they need to do their jobs safely and effectively".

WHO continues to support countries in securing supplies and equipment, and in scaling up procurement and distribution of these items.

He estimated that each month, the recently launched UN Supply Chain Task Force will need to ship 100 million medical masks and gloves; up to 25 million respirators, gowns and face shields, and 2.5 million diagnostic tests, among other supplies.

While there has been a "welcome slowing" of COVID-19 cases in European countries hardest hit by the pandemic, such as Spain and Italy, Tedros said the virus is spreading to rural areas in Africa.

With clusters of cases and community spread now appearing in more than 16 countries, he expects "severe hardship" for local health systems, which are already overstretched.

"The recent meeting of the G20 countries expressed strong support for Africa, which must be expedited even though the numbers in Africa are still relatively small but accelerating’, he said.

Tedros also updated journalists on the fight against Ebola in the Democratic Republic of the Congo (DRC), where a new case of the disease was confirmed in the city of Beni, North Kivu province, following 52 days without any incidence.

"Unfortunately, this means the government of DRC will not be able to declare an end to the outbreak on Monday, as hoped", he said.

The outbreak in the east of the country began in August 2018 and has killed more than 2,200 people.  The last person who was confirmed to have Ebola tested negative twice and was discharged from a treatment centre in early March.

WHO and partners will continue to work with the Congolese Government, affected communities and partners, Tedros added. 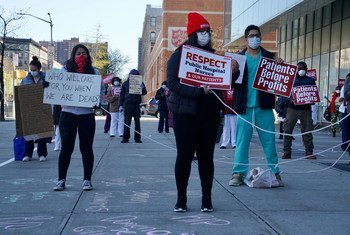 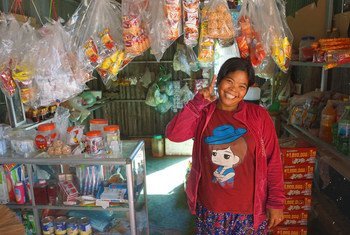