The COVID-19 pandemic should not be politicized as unity is the “only option” to defeat the disease, the head of the World Health Organization (WHO) said on Wednesday.

Responding to criticism levelled on Tuesday at the agency, Tedros Adhanom Ghebreyesus said, emphasizing that “my short message is, please quarantine politicizing COVID."

Said the WHO chief: "We should work across party lines, across religious lines. We shouldn’t waste time pointing fingers."

Describing the disease as "Public Enemy Number One", he also underscored the need for global solidarity at this time.

"For now, the focus should be on fighting the virus. There are many unknowns, and we don’t how it will behave in the future", he said.

Tedros recalled  how the United States and the former Soviet Union came together in the Cold War era to work on eradicating smallpox.

With more than 60,000 worldwide lost to the disease, Tedros warned that more people will die without a common united front.

"It’s very tragic that we lost many, many lives.  From the situation we have now…. we will continue to do everything to save lives.  Of course, when you’re confronted with a dangerous virus, a public enemy like this, we do regular assessments, strengths and weaknesses. We want to learn from our mistakes".

Tedros revealed that he has received racist comments and even death threats in the three months since WHO was informed of the “pneumonia with unknown cause” that first emerged in Wuhan, China at the end of December.

“I don’t care who says what about me. I would prefer to focus on saving lives”, he stated.

With Thursday marking 100 days since WHO was first notified about the new coronavirus, Tedros gave an overview of the agency’s output during this period.

“It’s incredible to reflect on how dramatically the world has changed, in such a short period of time”, he remarked.

The UN health chief said WHO has been “working day and night” in five key areas which include helping countries in both preparation and response, countering the “infodemic” surrounding the disease, and ensuring supplies of medical equipment for front line healthcare workers.

“We’ve sent more than one million diagnostic tests to 126 countries, in all regions, and we’re sourcing more. But we know much more is needed. This is not enough”.

WHO and private sector partners, including the International Chamber of Commerce and the World Economic Forum, are ramping up production and distribution of essential medical supplies.

UN agencies are also contributing to a UN COVID-19 Supply Chain Task Force, launched on Wednesday, which will match supply with needs, among other goals.

Tedros added that 130 scientists, funders and manufacturers from across the world have also signed a statement committing to work with WHO to speed the development of a vaccine against COVID-19.

“For the past 100 days, our unwavering commitment has been to serve all people of the world with equity, objectivity and neutrality”, he stated. “And that will continue to be our sole focus in the days, weeks and months ahead”. 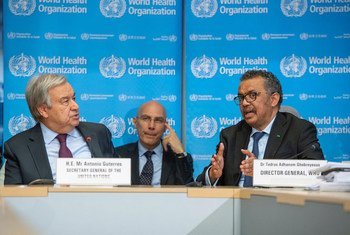 The World Health Organization (WHO) must be supported across the world, United Nations Secretary-General António Guterres said on Wednesday, describing the UN health agency, which has led the multilateral response since the beginning, as “absolutely critical” in overcoming the COVID-19 pandemic. 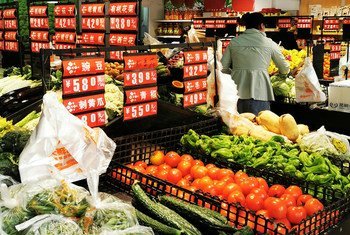 Global trade in goods could fall by as much as a third this year due to the ongoing COVID-19 pandemic, but a swift rebound in 2021 is possible if the world’s economic policymakers – working together – act immediately, the World Trade Organization (WTO) said on Wednesday.