Deaths from COVID-19 have more than doubled in the past week and will soon reach 50,000 worldwide, while the global caseload is heading towards one million, the head of the World Health Organization (WHO) told journalists on Wednesday.

WHO Director-General Tedros Adhanom Ghebreyesus said there has been “a near exponential growth” in case numbers over the past five weeks, affecting practically every country, territory and area of the world.

“As we enter the fourth month since the start of the COVID-19 pandemic, I am deeply concerned about the rapid escalation and global spread of infection”, he stated.

Although Africa, Central America and South America have reported relatively lower numbers of cases, Tedros warned that the disease could have “serious social, economic and political consequences” in these regions.

“It is critical that we ensure these countries are well equipped to detect, test, isolate and treat cases, and identify contacts. I am encouraged to see that this is occurring in many countries, despite limited resources”, he said.

Meanwhile, 74 countries have responded to the UN health agency’s call to participate in a “Solidarity Trial” to compare four promising drugs or drug combinations, which might help treat COVID-19, and save the lives of those worst affected.

More than 200 patients are taking part so far and have been randomly assigned to one of the study tracks.

Tedros said “each new patient who joins the trial gets us one step closer to knowing which drugs work”.

The trial was announced last Friday and aims to reduce the time needed to generate evidence about which medicines are safe and effective against the new virus.

To mask or not to mask?

The UN health agency continues to work with Governments and manufacturers to speed up production of protective equipment, including masks, for health workers on the frontlines of the battle against COVID-19.

Tedros also addressed the growing debate over whether the general public should also wear masks.

“WHO recommends the use of medical masks for people who are sick and those caring for them”, he said, adding “however, in these circumstances, masks are only effective when combined with other protective measures”.

Battling locusts and disease in Sudan

Amidst the COVID-19 pandemic, Sudan continues its battle against swarms of desert locusts which are ravaging crops and threatening food security.

To support the country in this fight, the African Union-United Nations Hybrid Operation in Darfur (UNAMID) contributed 10 4x4 off-road vehicles to the Ministry of Agriculture and Natural Resources during a virtual handover ceremony held on Wednesday.

“While these vehicles would help to curtail the destructive effects of the locusts, and enhance food security, they would also be of use to advance Government’s endeavor to combat the dreadful COVID-19 disease”, said Jeremiah Mamabolo, the Joint Special Representative at UNAMID, speaking from Khartoum.

The event marked the first-ever virtual press conference in the history of UN and AU peace operations in Sudan, according to the mission.

In a sign of the times, UNAMID drivers – wearing protective masks and gloves -- handed over the keys of the vehicles to transport officials at the Ministry’s parking lot. 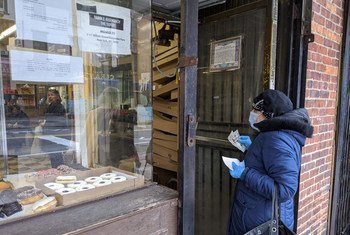 The global economy could shrink by up to one per cent in 2020 due to the COVID-19 pandemic, and may contract even further if restrictions on economic activities are extended without adequate fiscal responses, according to analysis released today by the UN Department of Economic and Social Affairs (DESA). 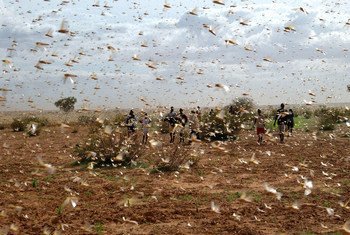