© UNICEF/Mebrahtu
UNICEF blankets and food supplies are about to be distributed in Lattakia, Syria, as the UN calls for a country-wide truce.

The top United Nations envoy in Syria called on Tuesday for an immediate country-wide truce, allowing citizens to save lives and tackle the common threat presented by the COVID-19 coronavirus.

“I am appealing specifically for a complete, immediate nationwide ceasefire throughout Syria to enable an all-out-effort to suppress COVID-19 in Syria”, Special Envoy Geir Pedersen said in a statement.

.@GeirOPedersen International donors will need to fully support humanitarian efforts &amp; respond to UN appeals. They will also need to do whatever must be done so that Syrians in all parts of the country have access to the equipment &amp; resources needed to combat the virus...

He flagged that Syrians are “acutely vulnerable” to the coronavirus; healthcare facilities have been destroyed; medical equipment and health professionals are in short supply; and internally displaced persons and refugees are living in “especially dangerous” conditions.

“I have real concerns for the impact on Syrian women, who are already at the forefront of existing health and community support systems”, said the UN envoy.

Pointing out that this common threat “knows no boundaries”, does not discriminate or chose sides, Mr. Pedersen spelled out that it endangers all Syrians.

“To confront this danger, the long-suffering Syrian people desperately need a sustained period of calm throughout the country respected by all parties”, he stressed.

Since March 2011, Syria has been in the throes of a conflict that has forced more than half of all Syrians to leave their homes.

According to the UN humanitarian relief agency, OCHA, an estimated five million Syrians have fled the country while more than six million others are internally displaced. The civil war has left more than 13 million people in need of assistance.

While recent, faltering ceasefire agreements, have de-escalated fighting in northeast and northwest Syria, they remain fragilewith the threat of an intensification of violence ever-present, which would have dire implications for Syria and impede the global response to COVID-19 at large.

“That is why a nationwide ceasefire - which I have long called for and is a foundation of Security Council resolution 2254 - is needed now more than ever - and why it must be respected by all parties”, said Mr. Pedersen.

Meanwhile, measures are being implemented in Government-controlled areas to address this crisis and actions are also being taken by de facto authorities outside government control areas.

“It is essential that such efforts are scaled up now”, underscored the UN envoy.  “There is not a day to lose”.

Turning to detention sites, Mr. Pederson cited humanitarian grounds in appealing for the large-scale release of detainees and abductees as well as “immediate access” for humanitarian organizations to all facilities, along with “urgent steps” to ensure detainees’ medical care and preventative measures against the coronavirus.

He highlighted that international donors would need to support humanitarian efforts, respond to UN appeals and do whatever it takes to allow Syrians throughout the country to access the equipment and resources necessary to combat the virus and treat patients.

“Nothing should impede this”, underscored the UN envoy. “Full, sustained and unimpeded humanitarian access to all parts of the country will be key”.

“All modalities will be needed to deliver humanitarian assistance and scale up prevention and protection”, he added.

To implement a nationwide ceasefire and help Syrians respond to the COVID-19 crisis, Mr. Pederson offered his assistance to the Government, the opposition, all relevant players on the ground, and key countries with influence that can support a scaling-up of action and ensure that the ceasefire holds, such as Turkey and Russia.

“Our common humanity demands that we act now so that the Syrian people are spared further fighting and that we combat this new threat to Syrians and to our world”, he explained.

“Let’s end the violence, work together to combat COVID-19 in Syria, and work to move ahead on a political way out of the crisis in Syria”, concluded the UN envoy. 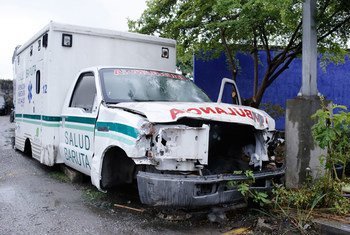 As the COVID-19 pandemic progresses, the UN High Commissioner for Human Rights on Tuesday called for an easing of sanctions against countries such as Iran to allow their medical systems to fight the disease and limit its global spread. 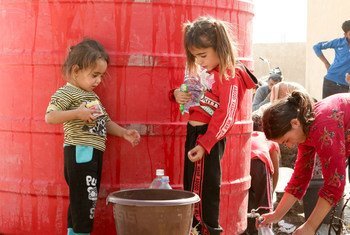 The UN Children’s Fund (UNICEF) and its relief partners in Syria are warning that water disruptions in the country’s war-battered north-east could exacerbate risks posed by the global coronavirus pandemic.