WFP/Fadi Halabi
A young boy stands in a camp for people who have fled fighting in northwestern Syria.

Difficult winter weather conditions, road congestion and military manoeuvres are restricting humanitarian aid delivery to desperate civilians in the Syrian province of Idlib, where a Government operation to weed out extremists has uprooted nearly one million people since December.

Women and children account for more than 80 per cent of the displaced, who are running out of safe places to escape the heavy air and ground strikes.

The World Food Programme is the largest humanitarian organization operating in northwest Syria. Through its partners, @WFP aims to provide food assistance to all displaced people in Idlib.https://t.co/0SOZZPRmOK pic.twitter.com/jviKzevJLJ

Shelling forced Nisrine Alomar to flee her home in Saraqib, located roughly 18 km from Idlib city.  She had already been displaced seven times.

The 30-year-old farmer and her seven children hid in trees until they reached the safety of Atma camp.

“Every time the bombing happens, we get really scared and the kids cry”, she said. “Every time it rains the water comes into the tent inside. Every time the kids go outside, they come back full of mud. They are getting sick and they are coughing most of the time.”

Through its partners, WFP aims to provide food assistance to all displaced people.

“Whether you are in the north or the south of the Idlib area, we are doing everything we can to get access to all people in need, no matter where they stand politically or geographically,” said Executive Director David Beasley.

WFP was among seven UN agencies which on Monday conducted a cross-border mission from Turkey into Idlib.

“The mission was a successful step to better understand the humanitarian realities on the ground and assess the feasibility of a sustained UN presence in Idlib”, said Kevin Kennedy, UN Regional Humanitarian Coordinator for the Syria Crisis, in a statement.

Last month, WFP scaled up its food assistance through its cross-border operations to reach more than a million people, including nearly 500,000 newly displaced civilians.

Increased bombardment has forced its partners to move food distribution sites closer to the Turkish border: both for the safety of the humanitarians and the families they serve.

Delays in delivery and distributions have occurred as some  aid partners have also become displaced.

WFP/Photo Library
Many towns in northwestern Syria have been destroyed in the conflict.

While the crisis in Idlib has generated the largest wave of displacement in the Syrian conflict, which began nine years ago this month, it is not the sole challenge, as the UN Special Envoy for the country reminded regional leaders meeting in Cairo on Wednesday.

“With five international armies active inside Syria, the dangers of wider international conflagration remain”, Geir Pedersen said in an address to the League of Arab States.

“Indeed, reports of missiles hitting Damascus in early February, which Syrian media attributed to Israel, remind us that the risk of international confrontation is acute across all Syria. And the ever-present danger of a resurgence of ISIL remains”.

Mr. Pedersen continues his efforts to facilitate a political solution to the Syrian conflict, which he said threatens regional and global peace and security.

If a meaningful political process cannot take hold, there is real danger of what the envoy termed a “no-war no-peace” scenario.

“Our common goal must instead be to stabilise Syria, create the conditions for the safe, voluntary and dignified return of refugees, and a better future for all Syrians. Yet, the immediate danger is in fact more escalation and more war, and with it more death and displacement – as we see in Idlib”, he stated. 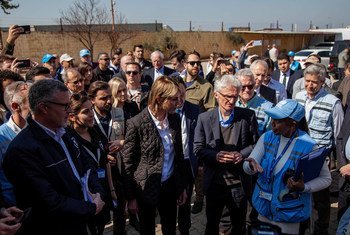 The United Nations is “determined to stand by” civilians across Syria’s war-torn northwest, as “a grave humanitarian crisis” continues, the UN emergency relief chief said on Tuesday. 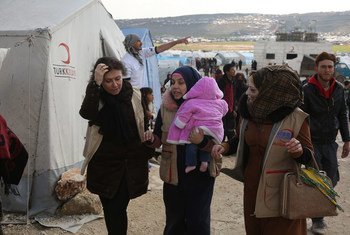