Intense clashes in Yemen’s Al Hazam City, this month have caused massive displacement with an estimated 1,800 families forced to flee their homes, according to a flash update from UN humanitarian coordination office, OCHA.

The new fighting exacerbates displacement caused by renewed clashes involving pro-Government forces and Houthi rebels around Marib, Sana’a and Al Jawf Governorates, which forced 5,000 families to flee their homes, according to a situation update from UNFPA, the UN Population Fund, which focuses on sexual and reproductive health.

Yemen is the world’s largest humanitarian crisis and displaced persons remain in need of protection, shelter and lifesaving health services.

Amid reported airstrikes, massive displacement was reported from Al Hazm District, which has been hosting thousands of civilians on the run from parts of Al Jawf and Marib Governorates. On 1 March, a reported 2,100 displaced families reached Marib, where they are being hosted by local communities.

Three-quarters of displaced are women and children

In the past three years, nearly 4.3 million people have been displaced in Yemen, about half of whom are women, with 27 per cent below the age of 18.

“Women and children make up almost 76 per cent of displaced persons in Yemen, and amid all the hardships, women have remained strong and resilient. In most cases they have been the ones carrying the burden of providing for their families”, said Nestor Owumohangi, UNFPA Representative in Yemen.

Conflict escalation and the ensuing humanitarian crises have further weakened the position of women and girls in Yemeni society, says UNFPA. The result has been the near erosion of protection mechanisms for women, increasing their risk of abuse and violence.

UNFPA mobile protection and reproductive health teams have been deployed to provide critical maternal health services, psychological first aid and transit kits, identifying the most vulnerable women and girls and referring them to relevant services.

With limited shelter options, displaced women and girls tend to suffer most from lack of safe spaces and limited access to basic services. Notably, displaced girls are more likely to lose access to schooling as families with limited resources deprioritize their education. An estimated 48% of Yemini women are illiterate and child marriage continues to be a common practice.

UNFPA is working to empower women and girls through safe spaces and mobile clinics in affected regions. By providing access to reproductive health services and psychosocial support, women receive life-saving assistance, whether they are displaced, on the move or caught in the frontlines of conflict.

Since mid-January, over 3,600 newly displaced households (25,000 individuals) have been identified as needing emergency relief. Mobile reproductive health teams continue to be deployed by UNFPA partners in Marib to serve newly displaced persons in collective sites. To date, over 4,400 displaced persons have received essential reproductive healthcare, with others referred to relevant services.

UNFPA the only source for reproductive services

UNFPA remains the single source of reproductive medicines, supplies and services for the country amid obstacles and challenges. With only 35 per cent of maternal health facilities currently functioning, investments are needed in strengthening the health system.

“Since the war started, health providers have not been receiving salaries,” explained Dr. Afrah Thabet, a Yemeni obstetrician stationed with UNFPA in the country. “We keep training them to provide minimum services for reproductive health. With the current situation in the country, we are trying our best to make sure that women are able to access commodities, medications and maternal health services they urgently require.”

Our colleagues at UN News Arabic interviewed Dr. Thabet last month, and you can find the story here.

In 2019, more than 3.5 million people in Yemen received lifesaving emergency packages and reproductive health and protection services through the support of UNFPA. More than 116,000 safe deliveries were facilitated and an estimated 30,000 survivors of gender-based violence received care.

‘Deprived of a childhood’

Among those reached is Hana’a, a displaced woman whose last name has been omitted for her safety and protection. At the request of her parents, Hana’a was married to a wealthy man twice her age, when she was just 15 years old.

"I was deprived of an education and a childhood,” she explained. “I was taught to be a 40-year-old woman trapped in a 15-year-old’s body."

Her husband lost his job when they were displaced and was later imprisoned. To support her family, Hana’a started baking and selling traditional pastries. She now lives with her five children in a single room, where they eat, sleep and bake.

Business start-up ‘has given me hope’

With the help of a UNFPA-supported business start-up programme at a safe space, Hana’a was granted a micro-loan to help her grow her baking business.

"The programme has given me hope, a fresh start for a new life" Hana’a said. "I am willing to work alone to build a better future for my daughters, a better one than I had.”

Safe spaces foster a sense of security and solidarity, allowing for the identification and support of survivors of gender-based violence while mobilizing and empowering women such as Hana’a psychosocially and professionally. For survivors of gender-based violence, livelihood and skills training provides an entry point for services, eliminating stigma and facilitating community outreach.

UNFPA supports 46 women and girls safe spaces across the country, two of which are in Marib and one in Al Jawf. Visits to these spaces have increased by 50 per cent in the past month.

To reach women and families in need, UNFPA takes a number of customized approaches. In remote villages, mobile teams provide in-home services, including maternal health, family planning services and psychosocial support to women and girls who cannot afford to pay for transportation to hospitals.

To date, the mobile teams have assisted over 5,500 individuals with reproductive health and protection services in Marib and Al Jawf following increased displacement.

“As much as food and shelter is essential, what determines women’s life or death in a crisis is their ability to access basic reproductive health and protection services on time,” explained Mr. Owumohangi. “Our greatest success has been in making sure that these unique needs of women and girls have not been overlooked in the world’s largest humanitarian crisis that is happening in Yemen.”

♦ Receive daily updates directly in your inbox - Subscribe here to a topic.
♦ Download the UN News app for your iOS or Android devices.
Yemen|women and girls|sexual and reproductive health 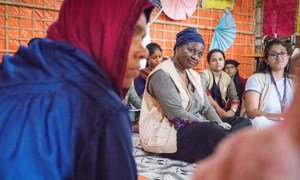 With more than half of all maternal deaths occurring in countries affected by humanitarian crises and fragility, the UN Population Fund (UNFPA) is calling for greater international support to provide life-saving reproductive health and protection services in these locations. 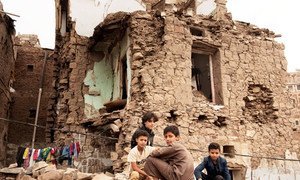