© FAO/Giampiero Diana
A swarm of desert locusts fill the sky near a farm.

The locust upsurge is “a graphic and shocking reminder” of the region’s vulnerability, said a joint statement from Qu Dongyu, Director-General of the Food and Agriculture Organization (FAO); Mark Lowcock, UN Emergency Relief Coordinator; and David Beasley, Executive Director of the World Food Programme (WFP).

“This is a scourge of biblical proportions”, the statement read. “Yet as ancient as this scourge is, its scale today is unprecedented in modern times”.

East Africa is facing major threat from #DesertLocusts. The window of opportunity to help is still open & the math is clear: pay a little now, or pay a lot more later. @FAO is urgently asking for $138M to help governments control these devastating pests: https://t.co/v7DePJNFhL pic.twitter.com/UbyPyDUEeY

Although the UN agriculture agency sounded the alarm in January, calling for financial assistance to control the outbreak, resources have been too slow in coming.

Since FAO launched its first appeal to help what was at the time three affected countries, the locust swarms have moved rapidly across vast distances and as of 12 February, have been sighted in Djibouti, Eritrea, South Sudan, Uganda and Tanzania.

Each day, more countries are affected.

Last week, a swarm crossed into South Sudan, one of Africa’s most food-insecure and fragile countries. And just this week, one swarm reached the eastern boundaries of the Democratic Republic of the Congo – a country that has not seen a locust incursion since 1944.

The potential impact of locusts on a country that is still grappling with complex conflict, displacement, Ebola and measles outbreaks and food insecurity would be devastating.

As the locusts continue their invasion throughout eastern Africa, and more details emerge on the scale of need in affected areas, the cost of action has shot up to $138 million to support Governments in controlling the ravaging pests, especially over the next four months.

The money would fund activities to combat the locusts before new swarms emerge, provide help for people whose crops or pastures are already affected and protect families and their livelihoods.

Desert locusts have a reproduction cycle of three months.

Acting now to avert a food crisis is a more humane, effective and cost-efficient approach than responding to the aftermath of disaster -- UN officials

In just a few weeks, as crops begin to sprout, the next generation of locusts will take wing in a renewed frenzy of destructive swarm activity, threatening to devastate East Africa’s most important crop of the year.Today, mature swarms are laying eggs within vast areas of Ethiopia, Kenya and Somalia, many of which are already hatching.

“But that doesn’t have to happen”, the UN leaders said. “The window of opportunity is still open. The time to act is now”.

They maintained that action to control and contain the locusts before the new swarms take flight and farmers crops first break soil is “critical”.

At the same time, FAO needs additional resources to immediately begin boosting the resilience of affected communities so they can better withstand some inevitable shocks.

“Acting now to avert a food crisis is a more humane, effective and cost-efficient approach than responding to the aftermath of disaster”, the statement underscored.

They welcomed the $33 million international donor response that has been received or committed.

“But the funding gaps are clear, and needs are growing too rapidly”, they flagged. “We need to do more”.

WFP has estimated the cost of responding to the impact of locusts on food security alone to be at least 15 times higher than the cost of preventing the spread now.

It is time for the international community to act more decisively.

“The math is clear, as is our moral obligation”, concluded the statement. “Pay a little now or pay a lot more later”. 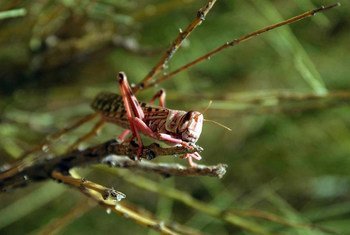 Ethiopia, Kenya and Somalia are dealing with desert locust swarms of “unprecedented size and destructive potential” that could spill over into more countries in East Africa, the United Nations Food and Agriculture Organization (FAO) warned on Monday.