UNMISS
The United Nations has been providing food aid to hungry South Sudanese over a period of many years.

The people of South Sudan have been “deliberately starved” in different parts of the country for ethnic and political reasons, and sexual violence against women and men as a weapon of war is ongoing, UN investigators said on Thursday.

The three-member commission,appointed by the UN Human Rights Council,also said South Sudan’s political elites are ‘oblivious’ to the suffering of civilians.

They warned of intercommunal conflict and terrible rights violations “in large swathes of territory”, as a new deadline approaches the formation of a unity Government after years of conflict.

Basis for a war crime

“The fact of destruction of crops or taking away the possibility of getting access to water through boreholes and so on, that can constitute the war crime of starvation, because your intention is to starve the civilian population….in this case by both sides, as we’ve documented,” said Professor Andrew Clapham, a member of the Commission on Human Rights in South Sudan.

In the Commission’s report, which will be presented to the Geneva-based Human Rights Council on 9 March, both the Government and armed groups are described as having pursued policies “responsible for the starvation of the population in Wau and Unity states”.

The tactic is part of a wider strategy “to deprive enemy communities of resources and thus force their capitulation”, along with a denial of humanitarian access and related displacement.

WFP/Gabriela Vivacqua
Food distribution in Pieri, South Sudan, where WFP is assisting 29,000 people, of whom 6,600 are children under five. (5 February 2019)

This has “significantly exacerbated famine in different parts of the country”, the report notes, “depriving hundreds of thousands of civilians of vital needs, including access to food”.

At the same time, the investigators describe how soldiers and militias have also been allowed “to reward themselves” and forcibly displace communities from ancestral lands, who have had little option but to join any of the many factions engaged in the conflict.

Other abuses include attacks on villages by forces loyal to the Government and opposition in Western Bahr el Ghazal, Unity and Jonglei states, that have driven displacement “at alarming rates”.

The Commission also documents extensive violent campaigns in Warrap, Western Bahr el-Ghazal and Unity States linked to Government forces who have forcibly recruited men and boys, as have opposition militia.

In the Commission’s fourth report on South Sudan for the Human Rights Council, the investigators also warn that conflict-related sexual violence has continued to be “widespread and pervasive”.

The practice follows “a recognizable pattern of terror and subjugation used as a tactic of war”, the report explains, such that the environment remains “insecure and deadly”.

But with mechanisms for justice and accountability for sexual and gender-based violations still lacking in South Sudan, denials by perpetrators and stigmatization of victims remain a major challenge.

“Entrenched impunity and lack of accountability, characterized by failure to address past and ongoing violations, has been the key driver of violence in South Sudan,” Professor Clapham told journalists in Geneva. “This needs to change to stabilize and democratize South Sudan.”

Massive corruption – which has siphoned off “millions of dollars” from the National Revenue Authority – also amount to economic crimes by senior Government officials, the investigators say.

They are “languishing in camps unfit to meet their basic needs and subsisting on diminished humanitarian aid”, the report notes.

In addition, the conflict has made approximately 2.2 million people refugees and asylum seekers, it says.

The Commission’s recommendations include the assertion that one key to securing a durable peace will be reaching agreement on the number and boundaries of states, as these will determine the distribution of power across the country.

South Sudan, the world’s youngest nation, has been mired in instability and conflict for nearly all eight years of its existence.

President Salva Kiir and his former Vice-President and long-time political rival, Riek Machar, signed a new peace accord in 2018, and hopes have been high that the deal would finally end the crisis and deliver better and safer conditions for millions that have been left homeless and hungry.

Violence has eased over the past year, though reported human rights violations have continued, and just today, three United Nations agencies warned that some 6.5 million people in South Sudan – more than half of the population – could be in acute food insecurity at the height of this hunger season (May-July).

Sudan: UN chief calls for ‘good faith’ effort by all, ahead of direct talks 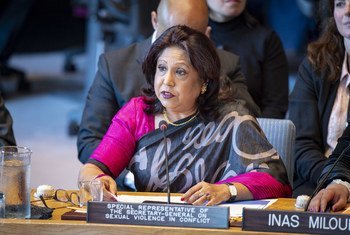 The expert leading UN efforts to stamp out sexual violence committed during wartime has welcomed the release of 78 women and 50 children by an armed group in South Sudan.