With progress stalled on both the peace and political fronts in Syria, UN Special Envoy Geir Pedersen urged ambassadors in the Security Council on Wednesday to “put their weight” into finding a solution to end nearly nine years of conflict.

His appeal was made against the backdrop of the rapidly deteriorating humanitarian situation in the northwest, where an ongoing military offensive has uprooted nearly 900,000 people since December.

.@geiropedersen my first concern is for Syrian civilians caught in the fighting, who continue to relay the urgency of their situation & their desperate need for safety. They feel they are not being heard. I appeal once again for full respect for IHL & for an immediate ceasefire

With families fleeing bombardment in freezing temperatures, the UN Secretary-General on Tuesday called for an immediate ceasefire, which Mr. Pedersen echoed in his briefing to the Council.

Stressing that hostilities are now approaching densely populated areas, such as Idlib city and Bab al-Hawa border crossing, which has among the highest concentration of displaced civilians in north-west Syria and also serves as a humanitarian lifeline, Mr. Pedersen warned of  the ‘devastating scale of humanitarian suffering’.

“I appeal once again for full respect for international humanitarian law and for an immediate ceasefire in Idlib, ultimately towards a nationwide ceasefire. I urge key international players to continue and intensify their contacts to restore calm,” the UN envoy said.

“I urge all members of this Council to put their weight firmly behind the search for a political way forward. As the Secretary-General reminded us yesterday, only in this way can we truly serve the interests of the Syrian people.”

The Idlib region is the last rebel-held stronghold in Syria, and the Government, supported by allies, is fighting to reclaim it.

“Turkey and Russia, as sponsors of the Idlib de-escalation arrangements, can and must play a key role in finding a way to de-escalate the situation now,” said Mr. Pedersen.

“Russian and Turkish delegations have met intensively in recent days…and there have been presidential contacts, too.  But no understanding has yet emerged.  To the contrary, public statements from different quarters, Syrian and international, suggest an imminent danger of further escalation.”

UN Humanitarian Coordinator Mark Lowcock told the Council that at least 100 civilians have been killed so far this month in air and ground strikes in the north-west, 35 of them children.

He reported that although people are trying to find shelter in increasingly crowded areas, nowhere is safe.

“Almost 50,000 people are sheltering under trees or in other open spaces,” he said.

“I am getting daily reports of babies and other young children dying in the cold. Imagine the grief of a parent who escaped a warzone with their child, only to watch that child freeze to death.”

Earlier this month, humanitarians had appealed for an additional $336 million to support some 800,000 people through cross-border operations from Turkey.  However, Mr. Lowcock anticipated that they will be requesting $500 million, as the aid effort is now “overwhelmed” by the rising needs.

OCHA/David Swanson
In this file photo, UN Humanitarian Coordinator, Mark Lowcock (r) meets with a group of Syrian drivers on the Turkish side of the two countries' common border.

“We are considering all options to increase support into the north-west. We are working with the Government of Turkey to expand the opening of the Bab al-Hawa border crossing to seven days a week, in order to increase the number of aid trucks coming in.  We are asking the Government of Syria for permission for a mission from Damascus to areas they have recently taken control of in order to see who is there and assess their needs”.

In addition to the crisis in the north-west, Mr. Pedersen pointed to other “worrying developments” elsewhere in Syria, including renewed hostilities in northern rural Aleppo and “unresolved tensions” in the north-east.

“ISIL resurgence is very worrying, with frequent attacks registered in the north-east, the desert region around Homs and other areas,” he added.

He said these developments are a reminder that Syria’s sovereignty, territorial integrity and independence continue to be “seriously compromised” by the conflict.

The envoy underlined the UN’s position that the Syrian conflict cannot be resolved through military means, and that a political process is necessary to move towards a solution.

However, he reported that progress on the Constitutional Committee launched last year also remains stalled.

The Committee is made up of equal numbers of representatives from the Government, opposition and civil society who will devise a new political road map for post-war Syria.

Members first met in Geneva in October but could not agree an agenda for their second meeting weeks later.

Mr. Pedersen expressed hope that a third session will soon be convened.  In the interim, he continues to engage with the parties. 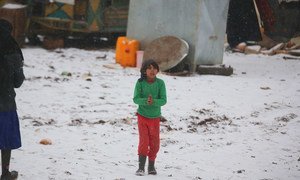 Alarmed by the rapid deterioration of the humanitarian situation in north-west Syria and the tragic suffering of civilians, UN Secretary-General António Guterres on Tuesday called for an immediate ceasefire in the ongoing fight that has displaced more than 900.000 civilians since early December. 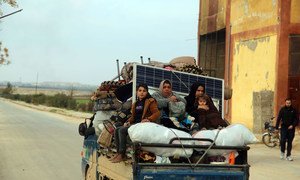