Pakistan’s solidarity and compassion for hosting Afghan refugees is a remarkable blueprint that the rest of the world should follow.

"Hosting refugees is a responsibility that has not been equitably shared." We pay tribute to the generosity of Pakistan and Iran, hosing 1.4 million Afghan refugees for 40 years. #RefugeeSummit https://t.co/QGEq7kgEZ0

That’s the message from UN Secretary-General António Guterres, who spoke at an international conference in Islamabad – where he also called for a renewed push for peace in Afghanistan.

“Working towards solutions for the Afghan people is not just a sign of solidarity; it is in the world’s best interest,” added Mr. Guterres.

The UN chief spoke alongside Filippo Grandi, the UN High Commissioner for Refugees (UNHCR), which jointly convened the conference with the Government of Pakistan.

For his part, Mr. Grandi said Pakistan, and Iran, had been with Afghan refugees through “bitter times of hardship and loss, renewed conflict and uncertainty.”

“And through years of efforts to rebuild a fractured nation and secure the peaceful future that the people of Afghanistan deserve,” he added.

Both UN leaders remarked on the “story of solidarity and compassion”, the solidarity of the people of the host countries; and the courage and resilience of the Afghan people, with Mr. Guterres noting that has seen “compassion play out in real time here in Pakistan.”

At a press conference alongside Pakistan’s Foreign Minister, Shah Mehmood Qureshi, the UN chief said: “Pakistan has provided the world with a global public good supporting Afghan refugees and it’s time for the international community to assume its responsibilities, and to support Pakistan very meaningfully.”

Mark Garten
Secretary-General António Guterres speaks to young people in Islamabad during a social media moment on the margins of the International Conference on 40 Years of Hosting Afghan Refugees in Pakistan.

Underlining the fact that Pakistan has hosted Afghan refugees for 40 years, the Secretary-General noted that since 1979, it has regularly been the world’s top refugee-hosting country.

“Even though major conflicts have since unfortunately erupted in other parts of the globe and the refugee population has soared, Pakistan today is still the world’s second largest refugee-hosting country,” Mr. Guterres said.

We must recognize that international support for Pakistan has been minimal compared to your own national efforts. As we look to the challenges ahead, the global community must step up — UN chief Guterres

Mr. Grandi noted that today, Pakistan and Iran together continue to host 90 per cent of registered Afghan refugees globally – some 2.4 million people. In addition, temporary labour migration and other forms of cross-border movement in the sub-region mean that both countries also host large non-refugee Afghan populations.

But despite Pakistan’s own challenges, the South Asian country’s use of innovative technology in refugee protection, insisting that many initiatives are now recognized as a global model of good practice, said the Secretary-General.

These include biometric registration, access to the national education system, health care and inclusion in the economy.

The UN has worked with the Pakistan authorities to support Afghan refugees, Mr. Guterres said, by implementing aid and development projects across the country – and also by helping Afghans return home.

For them to be able to stay in Afghanistan, he appealed for peace, but also effective reconstruction that creates conditions for their successful return and reintegration.

For Afghanistan, a challenging road ahead

“We know the solution lies in Afghanistan,” said the Secretary-General, who noted that the as the Afghan conflict “drags on and on,” the deep impact of the protracted nature of conflict, poverty and forced displacement are clearly evident.

Echoing that sentiment, Mr. Grandi explained that amid the fighting in Afghanistan, “more than 400,000 people were displaced within the country last year alone, by conflict, drought and other natural hazards; and just 8,000 refugees were able to return home through the voluntary repatriation programme.”

Mr. Guterres went on to reaffirm that the preferred durable solution for refugees has always been voluntary repatriation in safety and dignity to their country of origin. This is also true for Afghan refugees.

And Mr. Grandi added: “Working on solutions is all the more important as efforts to revitalize the peace process in Afghanistan continue and hopefully gain momentum. Afghan displacement can only be solved by peace, and peace will be strengthened by solving forced displacement.”

“Returns to Afghanistan, as we both said, have hit a historical low. Afghanistan and its people cannot be abandoned. Now is the time for the international community to act and to deliver,” stated the UN chief.

He added that the UN was working together on a region-specific Support Platform to assist voluntary repatriation and sustainable reintegration of refugees in Afghanistan, while providing help to refugees and their host communities in both Pakistan and Iran.

“Peace efforts leading to intra-Afghan negotiations will pave the way, but sustainable peace and security hinges on better integrating our work on humanitarian, development and peace efforts,” said the UN chief, adding: “Done right, this work can be a model for the rest of the world.”

UN Photo/Mark Garten
Secretary-General António Guterres speaks at the National University of Science and Technology in Islamabad, Pakistan on the topic of peacekeeping.

Calling for a realistic approach and acknowledging the “big challenges lie ahead”, Mr. Guterres stressed that the message of the conference – and the presence of so many senior Government officials from all over the world – “is a testament of hope and commitment to a new partnership for solidarity and a better future for the people of Afghanistan and Pakistan and for the world.”

Later on Monday, at the Centre for International Peace and Stability (CIPS) in Islamabad, the Secretary-General paid tribute to the heroic 157 Pakistani peacekeepers that sacrificed their lives “to protect the lives of some of the most vulnerable populations in the world.”

The Centre, which is part of the National University of Sciences and Technology in Islamabad, is one of the most important institutions in the world that support peacekeeping activities in an extremely competent and professional way.

According to UN data, Pakistan is the sixth largest contributor of troops and police, with more than 4,000 uniformed personnel serving in nine United Nations peace operations, including in some of the most dangerous UN missions, such as in the Central African Republic and Mali.

“Pakistani officers are playing an important part as Force Commanders and Chiefs of Staff, and Pakistan contributes critical equipment, including a helicopter unit in Mali”, said Mr. Guterres, noting also that Pakistan was the first country to endorse the Declaration of Shared Commitments on Action for Peace, known by the shorthand  A4P.

Looking ahead, he said that there are several areas for progress within the A4P framework, including:

The implementation of the A4P by Pakistan was not limited to the enhancement of partnership, it also encompasses many other aspects of the Declaration, including on ‘women, peace and security’.

In that regard, the country has deployed the first-ever Pakistani Female Engagement Team to South Kivu in the Democratic Republic of the Congo.

UN Photo/Mark Garten
Pakistani women peacekeepers in the audience at the National University of Science and Technology in Islamabad, where Secretary-General António Guterres delivered an address on the topic of peacekeeping.

“Pakistan is a leader in championing women peacekeepers and an example for other troop contributors”, said the Secretary-General.

He said that this inspiring all-women Pakistani team has implemented successful projects on vocational training, medical outreach and psychological support, and improved information-gathering that feeds into security assessments.

“They can do things that us, men, are not able to do – gain the confidence and create conditions for more effective action of our peacekeeping units”, he maintained.

Pakistan-India crossing is a ‘Corridor of Hope’, UN chief says, wraps up visit with call for interfaith dialogue 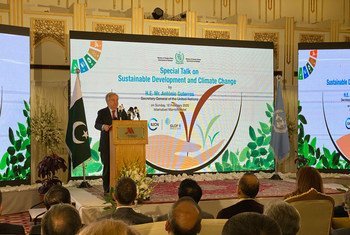