The challenges facing African nations are “complex, multi-faceted and far-reaching" but a “collective, comprehensive and coordinated” response by the global community will build on the momentum that already exists to help the continent thrive, the UN chief told the African Union Summit on Sunday.

Secretary-General António Guterres told the annual gathering of 55 African nations in the Ethiopian capital, Addis Ababa, that the strategic partnership between the UN and AU is “of paramount importance” and he was deeply committed to the principle that Africa’s challenges can only be solved through African leadership.

UN Photo
UN Secretary-General Antonio Guterres with the heads of state at the AU summit in Addis Ababa Ethiopia, 09 February 2020

There are three main challenges “of particular urgency” facing the continent, said the UN chief, highlighting first, making inroads against poverty through the Decade of Action to deliver the Sustainable Development Goals (SDGs), which dovetails with the AU’s own drive towards Africa’s Agenda 2063.

The drive for sustainable development has yielded significant improvements, with rising living standards, better access to quality education, healthcare and services, “but progress remains slow and uneven when it comes to ending poverty and ending exclusion”, said Mr. Guterres.

Calling for fairer globalization, he said African nations were working to eliminate corruption, reform taxation systems, governance and institutions, but it was up to the international community to “complement these efforts with much stronger determination", including fighting illicit flows of capital.

Engaging and empowering youth is also necessary, he said: I am inspired by young people across Africa who have become advocates for peace through dialogue and addressing the root causes of conflict.”

Turning to the climate crisis, he said Africa was the least responsible for accelerated global warming, but “among the first and worst to suffer.”

The Secretary-General commended Africa’s “longstanding moral and political leadership on the climate emergency.”

I’m proud to see that stronger ties between the @_AfricanUnion and the @UN are delivering positive results.I’m committed to continue strengthening our partnership – based on shared values and mutual respect.#AUSummit https://t.co/HW4dfFymKK pic.twitter.com/sQxr8gJugr

“Last year was devastating, along with the destruction of cyclones Idai and Kenneth, there are numerous under-reported climate-linked crises from the Sahel to Zambia, from Kenya to Madagascar”, he added.

“We need more ambition on mitigation and, especially for Africa’s sake, more ambition on adaptation and financing to build resilience of African countries and communities and allow for effective recovery and reconstruction.”

‘Silencing the Guns’, beating terrorism together

Heralding the successes of UN-AU partnership through the Union’s “Silencing the Guns” initiative, the UN chief said joint efforts had advanced peace, most notably in the past few months in the transition to democratic governance in Sudan.

At the core of the third urgent challenge facing African countries and the UN together, he said that continuing with the UN’s Action for Peacekeeping initiative (A4P) was essential, given the limitation of traditional peacekeeping “particularly where there is no peace to keep, as we see in the Sahel.”

He reiterated his view that “we increasingly need peace enforcement and counter-terrorism operation implemented by the African Union and supported by the UN.”

“It is obvious for the G5 Sahel today, but also for the larger coalition, that we will have to build to beat terrorism in Africa. The lack of support of the international community is clear today in the Sahel and Lake Chad.

“The whole region has been imperiled by terrorism”, said Mr. Guterres, against the backdrop of rising extremist violence and transnational crime across the vast, porous borders of the Sahel region.

“Thousands have been killed and countless more continue to suffer. In Burkina Faso, Mali and Niger, the increasing number and complexity of terrorist attacks on both civilian and military targets demonstrate the need for a more robust and integrated response with a focus on cross-border issues.”

‘The Africa we want’

Collective action is required at the borders of those Sahelian countries where the State needs to be strengthened, he added, and where public social services “are cruelly lacking.”

“Through combined efforts, coordinated approaches and renewed commitment to multilateralism”, said the Secretary-General, “we can continue Africa’s undoubted upward momentum.

“I reiterate my full commitment to continue working closely with you to ensure we achieve the Africa we want as set out by Agenda 2063 and truly silence the guns forever.” 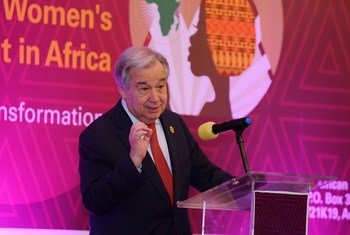 The UN chief on Saturday called on the international community to recognize the need for African counter-terrorism operations, backed by the UN Security Council,  to tackle the growing threat of extremist violence across the continent, and “predictable funding, guaranteed by compulsory contributions”. 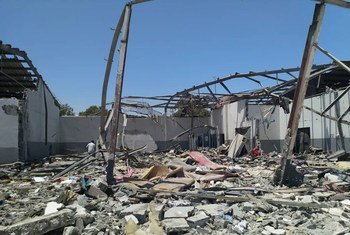