The UN chief on Saturday called on the international community to recognize the need for African counter-terrorism operations, backed by the UN Security Council,  to tackle the growing threat of extremist violence across the continent, and “predictable funding, guaranteed by compulsory contributions”.

Secretary-General António Guterres was speaking to reporters as the African Union (AU) Summit got underway in the Ethiopian capital, Addis Ababa, describing the relationship between the AU and the UN as “one of the most important partnerships in the world – a partnership that is committed to responding to the anxieties and aspirations of the African people, and paving the way for a better future for us all.”

He said the countries of the Sahel and Lake Chad faced “a multitude of challenges, be it the climate crisis, economic despair and exclusion, or extremism”, saying that “African peace enforcement” involving the AU, needed concrete support under Chapter VII of the UN Charter which authorizes the Security Council to use force against threats to peace, breaches of the peace and acts of aggression.

Speaking to the press at #AUSummit, @antonioguterres calls for African counter-terrorism forces in the Sahel and beyond, backed Security Council Chapter VII mandates and guaranteed predictable financing from the international community. Open remarks here: https://t.co/fRixQfmncN pic.twitter.com/oeMSXLrUyk

A new coalition needed to be built to defeat terrorism in Africa, Mr. Guterres told reporters, but this could only be done with enough funding and support.

Noting that “the chaos in Libya is worsening”, the UN chief criticized the “direct complicity” of some Member States in recent months who have fuelled violence across the oil-rich North African nation, and armed the main forces opposed to the UN-backed Government.

“Only a political solution will bring peace”, and the UN Mission in Libya, UNSMIL, “is ready to receive an African Union representation on its premises and we want the AU focal points to be able to participate on all the intra-Libyan working groups”, he added, especially those put in place at the recent Berlin conference.

On the margins of the summit on Saturday, Mr. Guterres met the Libyan Minister of Foreign Affairs, reiterating the UN’s commitment to working with all parties to secure peace.

‘Silencing the Guns’ for peace and development

The UN chief said AU-UN strategic partnership was growing “every stronger and more dynamic”, especially on the AU signature initiative that is central to this year’s conference, “Silencing the Guns”, together with human rights, gender-equality, climate change, and sustainable development – which lie the heart of the AU-led Agenda 2063 plan for the continent.

The ambitious initiative is aimed at ending wars, civil conflicts, gender-based violence and genocide prevention across the continent.

“We need fair globalization, so that Africa no longer suffers from unfair trading and financial rules, subsidies and other policies and market distortions that perpetuate inequality and make it harder for Africa to compete and prosper”, said Mr. Guterres.

The Secretary-General also highlighted the damaging impact of the climate crisis on African peace, prosperity and development, linking it to the current locust swarms which are plaguing Ethiopia and East Africa.

“The FAO (Food and Agricultural Organization) tells us a swarm the size of Paris will consume, in one day, as much food as half the population of France.

“I express my deep solidarity with the people and communities affected. The United Nations has issued an urgent appeal for assistance. I ask the international community to respond with speed and generosity to ensure an effective response and control the infestation while we still have the chance.” 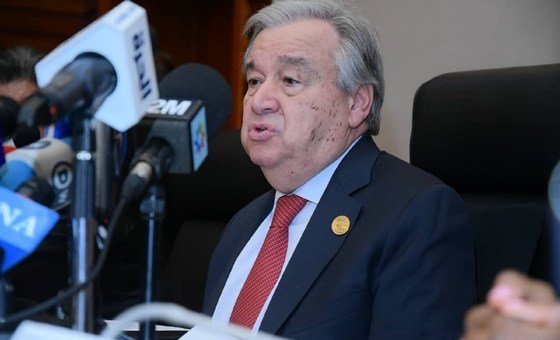 Despite the challenges, Mr. Guterres notes the signs of hope which are everyone across Africa. He cited the first anniversary this week of an historic peace agreement in the Central African Republic, and elections in the Democratic Republic of the Congo, Madagascar and Mali last year.

For Sudan, which a year ago was roiled by political and economic crisis on the streets that led to the ouster of Omar al Bashir after 30 years in power, he lauded the success so far of the transitional Government as a “major achievement”, where the AU had played “an essential mediating role” in a new Constitution.

“And now we are working together to help this Government keep its commitments”, the Secretary-General said.

“I reaffirm that it is time to remove Sudan from the list of States that support terrorism and to mobilize massive international support to enable Sudan to overcome its challenges.

“These advances show that it is possible to act and must be relentlessly supported by the international community.”

Talking questions from reporters, the UN chief made a powerful plea to the leaders of war-torn South Sudan, where a deadline is fast approaching for President Salva Kiir and his former deputy, Riek Machar, to agree terms for a new unity government.

“The South Sudanese people's suffering is something that I feel very deeply and very emotionally”, said Mr. Guterres, highlighting his own experience travelling to the world’s youngest nation, where the euphoria of independence in 2011 has given way to brutal conflict, displacement and mass rights violations.

“So, I have one with one simple message to the leaders of the country: think about your people. Respect your people”, he said.

“You have not the right to continue a confrontation when your people are suffering so much. It is your moral and political responsibility to put an end to this and to find the agreements that are necessary...It is for me totally unacceptable, that we are still again, close to the deadline of a new period that was declared, that there is no agreement on a number of issues.”

He concluded saying it was time for South Sudanese leaders “to agree to cooperate and to deserve the wonderful people they have.”

Poverty in Africa ‘still has a woman’s face’

Addressing a High Level Meeting on Gender Equality and Women’s Empowerment at the AU Summit, the UN chief said that the reality in Africa, and the rest of the world, is that poverty “still has a woman’s face.”

I’m worried about male dominance in high-tech sectors, as we can see in Silicon Valley.If we don’t reverse this trend, all of our global efforts for gender equality will be undermined. pic.twitter.com/UmWfSvVywJ

Women are often concentrated in precarious jobs and they carry a disproportionate share of unpaid care and domestic work, while violence against women remains pervasive.

“As the world recommits to achieving irreversible progress towards gender equality, I encourage African States, in partnership with civil society and other stakeholders, to contribute to the Beijing+25 Action Coalitions...The United Nations stands alongside the African Union in working to overcome the peace and security, development and human rights challenges that continue to limit African women and girls.”

He called on States to enhance women’s social, economic and financial inclusion.

“It means providing true protection against violence – in conflict and in peacetime, on the streets and in the home. And it means making sure women and girls are encouraged to develop scientific skills and ensuring that they have access to innovation and technology”, he added.

Looked westwards to the billionaire enclaves of northern California, he said it was “rather strange that the area where we see more male chauvinism in the economy, is exactly in some of the more high-tech places, namely Silicon Valley. This is a battle we must win”, otherwise we risk reversing all the trends for gender equality of the last few decades, he added.

“Let us ensure that the needs and perspectives of Africa’s women and girls are fully integrated in our efforts to build peaceful, just and inclusive societies”, he concluded.

UN Photo
The United Nations Secretary General, Antonio Guterres at the launch of the book “She Stands for Peace: 20 years, 20 journeys”, at the AU Summit in 2020.

‘She stands for peace’: pathfinders and pioneering women

On Saturday night, the UN chief joined dignitaries attending the AU Summit for the launch of a book jointly produced by the two organizations called She Stands for Peace: 20 years, 20 journeys.

It captures the stories of outstanding African women and women-led organizations who have worked tirelessly towards building a lasting peace on the continent.

Mr. Guterres told the launch that despite the landmark Security Council resolution 1325 on Women, Peace and Security, to empower women in their own right, the “positive trend” in recent years towards consideration of the gender pespective in conflict resolution had gone into reverse.

“This is essentially a question of power. This demonstrates that men are not so easy in leaving power...Power is not easily granted. Power needs to be taken.”

The book has been published in close cooperation with the African Union Commission, he said, “and features an enormous variety of women: from rural villages and cities; from privileged upbringings and from humble backgrounds.

“What these remarkable women have in common is their work to promote peace and mediate conflicts in communities”, added the Secretary-General, “often without recognition or payment, and sometimes at great personal risk. They are pathfinders, leaders; pioneers and courageous innovators.”

He noted that more than anything, the women in the book “want less talk about women, peace and security, and more action. The women in this book are counting of us, the international community, and on their leaders and the leaders of other nations to do more than make speeches about them. They want actual investment in them as equal stakeholders who care about the future of their communities and nations. They know in intimate detail – equal to their male counterparts – the logistics, tactics, violence and human cost of war.”

We need to do much more to ensure women’s equal participation in peace processes said Mr. Guterres, “and to put survivors at the heart of our approach to sexual and gender-based violence in conflict.” 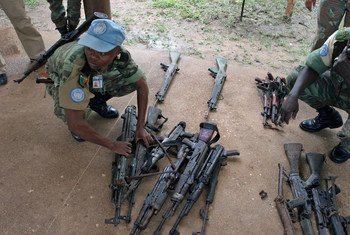 Nearly 50 per cent of all violent deaths between 2010 and 2015, more than 200,000 each year, involved small arms and light weapons, the Security Council was told on Tuesday, during a briefing by UN disarmament chief Izumi Nakamitsu. 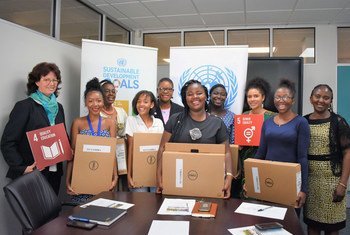 Six young women from Namibia are on the path to a career in the field of information and communications technology (ICT), with the support of the UN office in the country.