UNAMI
A busy street in Baghdad, Iraq, before the current civil unrest.
1 February 2020
Peace and Security

The top UN official in Iraq is calling on the country’s newly designated Prime Minister to urgently deliver on reforms and demands for accountability, amid ongoing protests.

He will have one month to form a new Government.

The UN mission chief stated he will require the support of all stakeholders as the road ahead remains difficult.

"The commitments expressed in the statement of the prime minister-designate address many demands of the peaceful protesters. While this is surely a welcome and encouraging sign, the Iraqi people will ultimately judge their leadership on results and accomplishments," she said.

Ms. Hennis-Plasschaert recalled that the UN has repeatedly urged stakeholders to "rise above partisanship and place the national interest first."

She underlined the Organization’s support to the Iraqi Government and people as they work to build a more peaceful, just and prosperous nation. 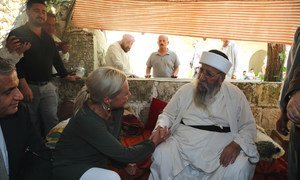