In a briefing to the Security Council on Thursday, Secretary-General António Guterres underlined the value of cooperation between the UN and the 10-member regional bloc, the Association of Southeast Asian Nations (ASEAN).

While recognizing the organization’s contributions to peace and security, the UN chief also highlighted the need to work together to counter potential threats, including the climate crisis.

“Given that four ASEAN Member States rank among the 10 countries in the world most affected by climate change, we look forward to strengthening our ties with ASEAN nations as they take urgent action to strengthen adaptation and build resilience to disasters,” he said.

ASEAN was established in 1967 and represents nearly 650 million people, more than half of whom are under the age of 30.

Since inception, it has been engaged in preventing disputes within the region, according to Secretary-General, Dato Lim Jock Hoi.

The UN chief pointed to recent ASEAN diplomatic efforts on the situation in Myanmar’s Rakhine state, where a reported military crackdown in August 2017 pushed more than 700,000 members of the minority Rohingya community into neighbouring Bangladesh.

“It is essential that international efforts find a solution to the plight of displaced persons and refugees still living in desperate conditions,” he said.

Although Mr. Guterres told ambassadors that the situation on the Korean Peninsula “remains of deep concern”, again, ASEAN has contributed to promoting peace there.

He recalled that Singapore and Hanoi hosted historic meetings between North and South Korea.

With Member States Indonesia and Viet Nam sitting on the Security Council, “we hope that stronger links can be built between ASEAN and the UN to advance diplomatic efforts on the Korean Peninsula”, he added.

Looking ahead, he said the two partners can strengthen cooperation on peacekeeping, including in training and increasing women’s participation in peace processes.

He added that the UN will further boost technical support to ASEAN in counter-terrorism initiatives and preventing violent extremism, among other areas.

“I am deeply convinced of the value of ASEAN-UN cooperation for peace, security and sustainable development”, said Mr. Guterres.

“With the presence of two engaged and dynamic ASEAN members on the Council in 2020, I look forward to our two organizations working increasingly closely together for the future we want and need.”

♦ Receive daily updates directly in your inbox - Subscribe here to a topic.
♦ Download the UN News app for your iOS or Android devices.
security council|ASEAN 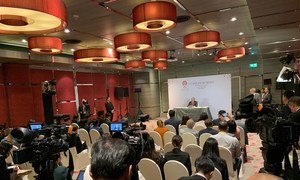 Four of the 10 countries most affected by climate change are members of the Association of Southeast Asian Nations, United Nations Secretary-General António Guterres said on Sunday, urging the ASEAN-UN Summit in Bangkok to “confront the world’s climate emergency”.