The “dire and deteriorating humanitarian situation” affecting women and children in northwest Syria was the UN Emergency Relief Coordinator’s top concern on Wednesday morning as he briefed the Security Council in New York.

“Hostilities have escalated in recent days in the Idlib area, especially around Ma’arat al-Numan, Saraqeb and western Aleppo”, said relief chief Mark Lowcock, describing the fighting in those areas as appearing to be “more intense than anything we have seen in the last year”.

People in Idleb feel increasingly under siege: bombardment follows them from place to place. They are traumatized and feel totally abandoned by the world. Unless the current hostilities stop, we will see an even greater humanitarian catastrophe. https://t.co/58KfjCchRW

Civilians continue to be subjected to heavy bombardment and shelling. The UN human rights office (OHCHR) documented at least 81 mostly women and children killed by air and ground-based strikes between 15-23 January alone.

“This total is in addition to the more than 1,500 civilian deaths that OHCHR has verified since the escalation began in late April”, he detailed.

While the most alarming reports are from southern Idlib, where hundreds of Government airstrikes have been concentrated, non-State armed groups continue to shell Aleppo city, killing or injuring dozens of civilians.

“Many families are moving multiple times”, said Mr. Lowcock. “They arrive in a place thought to be safe, only for the bombs to follow, so they are then forced to move again”.

Amidst the fighting, humanitarian organizations have provided food to more than 1.4 million civilians and health supplies to treat almost 200,000 people.
“This has all come in through the cross-border operation, as re-authorized under your Resolution 2504” Mr. Lowcock told the Council, calling it “the only way to assist the more the 2.8 million people in need in northwest Syria.”

Noting that cross-border humanitarian operations have “staved off a massive humanitarian catastrophe” there, he emphasized that civilians are “still suffering terribly”.

He painted a picture of traumatized people under siege feeling “totally abandoned by the world”.

“They don’t understand why this Council is unable to stop the carnage amongst a civilian population trapped in a war zone”, he underscored.

“Their message to you is essentially the same one I relayed when I briefed you on 30 July: “We are afraid. Please help us. Make it stop.’”

Stressing that the most urgent need is “to protect the civilian population and to scale up the humanitarian response”, the Humanitarian Coordinator called on “all parties to facilitate safe and unhindered access for humanitarian workers and supplies to address civilians’ essential needs”.

70,000 still displaced across the northeast

Turning to northeast Syria, he said that some 70,000 people have remained internally displaced since military operations began last October.

“An additional 90,000 people are living in IDP camps”, said the relief chief, noting that overall there are around 1.8 million in the northeast in need of humanitarian assistance.

While an average of 850,000 people in 2019 had received monthly assistance from within Syria, the removal of the Al Yarubiyah border crossing with Iraq, has prompted the World Health Organization (WHO) to forecast a reduction in the medical services and supplies.

As requested in Resolution 2504, the Council will be updated by end-February on the feasibility of using alternative modalities for that border crossing to ensure that humanitarian assistance reaches those in need throughout Syria.

“There is a grave and in many ways worsening situation on the ground”, UN Deputy Special Envoy for Syria, Khawla Matar said, updating the Council on the current political landscape of the war-torn country.

She spotlighted that the alarming scale of military operations in the northwest has resulted in “devasting consequences” for three million people in the Idlib area and reiterated the Secretary-General’s call for an immediate ceasefire and urged a “sustained de-escalation” by all parties to the fighting.

Ms. Matar informed the Chamber that the Special Envoy continues to engage with all Syrian political players, including the groundbreaking Constitutional Committee, and key international partners “to unlock progress in the difficult path out of the Syrian conflict”.

Meanwhile, for the first time the working group on the release of detainees and abductees, the handover of bodies and the identification of missing persons - comprising Iran, Russia, Turkey and the UN - will convene, as part of an ongoing rotation, in Geneva next month.

“We realize progress on this file is not easy, but it would be of enormous significance to so many Syrians to see the pace and scale of releases increase”, she said.

She also said that “countering Security Council-listed terrorist groups is imperative”, noting that it must be done in a way that protects civilians and fully respects international humanitarian and human rights law, which is “only likely to be effective with genuine cooperation among relevant players”.

Ms. Matar reported on the “turbulent” north-east, “protracted tensions” in southern Syria and the “presence of five foreign armies” operating in the country – a reminder of the continuing dangers the crisis presents to international peace and security and the challenges to Syria’s territorial integrity.

The deputy envoy underscored the need for a process that “builds trust and confidence step-by-step” to create a safe and neutral environment, which would also bolster confidence among refugees for safe, voluntary and dignified refugee returns and to those who wish to support the reconstruction of Syria.

And while the Special Envoy, Geir Pedersen, is carefully exploring “modest openings” to further pursue this, his deputy acknowledged that “genuine dialogue among key international players” was needed.

Ms. Matar affirmed that the Special Envoy prioritizes the inclusion of a full range of Syrian voices in the process and continues to consult widely and build bridges whenever possible.

“The Special Envoy will continue to press for an end to the violence”, she concluded, saying that he also seeks to “unlock the kind of comprehensive political process that would result in a lasting political settlement, that meets the legitimate aspirations of the Syrian people, and that respects and restores Syria’s sovereignty, unity, territorial integrity and independence.” 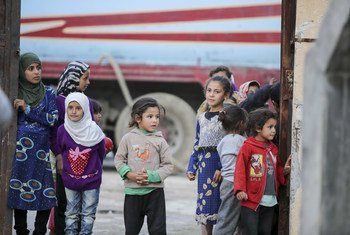 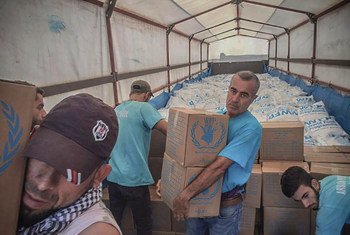