Unsplash/Albert Laurence
A rose placed on the railway tracks at the Memorial and Museum Auschwitz-Birkenau, Poland.
27 January 2020
Human Rights

Commemorating the 75th anniversary of the liberation of the Auschwitz-Birkenau death camp, and the six million Jews and others murdered on Nazi orders during the Holocaust, UN Secretary-General António Guterres told a ceremony in New York on Monday that the world must “re-commit to preventing any repetition of those crimes”.

“Our solidarity in the face of hatred is needed today more than ever, as we see a deeply worrying resurgence in antisemitic attacks around the world, and, almost unbelievable, also around us here in New York”, he said on Monday, Holocaust Remembrance Day.

The Kaddish resonates in the General Assembly Hall as the United Nations marks the 75th anniversary of liberation of Auschwitz-Birkenau. #HolocaustRemembrance pic.twitter.com/tGyZtt34tH

Noting a rising trend in antisemitic hate crimes across the United States, he recalled that less than a month ago, a knife attack injured five at a Hannukah party in Monsey, and left four dead at a kosher supermarket in neighbouring New Jersey.

And he said that “the situation for Jews in Europe is, if anything, worse”.

Citing incidents in the United Kingdom, Germany and Italy, he also noted that 2018 saw a 74 per cent jump in antisemitic attacks in France.

“There is a global crisis of antisemitic hatred; a constant stream of attacks targeting Jews, their institutions and property”, spelled out the UN chief.

Moreover, he maintained that the antisemitic upsurge was tied to “an extremely troubling increase” in xenophobia, homophobia, discrimination and hatred in many parts of the world, targeting people based on race, ethnicity, nationality, religion, sexual orientation, disability and immigration status.

As Soviet army troops were stunned into silence while liberating Auschwitz 75 years ago, today the world must not look away at the enduring horrific details.

Mr. Guterres, called it “our duty” to continue looking, “to learn and to relearn the lessons of the Holocaust, so that it is never repeated”.

“The most important lesson is that the Holocaust…was the culmination of millennia of hatred, from the Roman Empire to the pogroms of the Middle Ages”, he continued. “My own country, Portugal, committed an act of utter cruelty and stupidity by expelling its Jewish population in the end of the fifteenth century”.

And he flagged that decades before Hitler’s rise to power, eastern Europe’s Jews were shipped to the African island of Madagascar

In recounting his visit to Yad Vashem two years ago, the UN chief was appalled to observe “the ability of antisemitism to reinvent itself and re-emerge over millennia”.

“It takes new forms; it may be spread by new techniques; but it is the same old hatred”, he said.

He pointed out that millions of people were desensitized to crimes against humanity taking place around them, warning, “we can never lower our guard”.

The Holocaust was “a complex operation arising from long-held prejudices” with societal corruption that ran throughout, from language to education and political discourse, the UN chief explained.

He urged everyone to examine their own prejudices, “guard against the misuse of our own technology and be alert to any signs that hatred is being normalized”.

When any group of people is defined as a problem, Mr. Guterres said, “it becomes easier to commit human rights abuses and to normalize discrimination against them”.

An overriding objective of the 2030 Agenda for Sustainable Development is to promote human rights and address discrimination and hatred.

“The Decade of Action I launched last week is aimed at stepping up support for countries around the world to build inclusive, diverse, respectful societies that provide lives of dignity and opportunity for all”, concluded the Secretary-General.

For his part, Tijjani Muhammad-Bande, President of the General Assembly called the Holocaust “the most horrific genocide in human history”.

Noting the chilling accounts of the survivors, he emphasized the need to do more to ensure an “inclusive, peaceful and harmonious global community that encourages unity in diversity”.

“They should remind us of the constant need to be vigilant by collectively promote efforts that discourage hate slogans and speeches, including other intolerable vices that fuel discrimination, xenophobia and other prejudices”, said Mr. Muhammad-Bande.

Pointing out that today’s youth will be tomorrow’s leaders, he stressed the need to educate the young about this and all heinous crimes to safeguard that the “atrocities of the Holocaust are not repeated”.

“We should always remember the victims of the Holocaust and ensure that their experiences serve as a constant reminder of the need to promote peace, harmony, tolerance, cooperation and inclusion in our collective aspirations for a more peaceful and prosperous world”, concluded the Assembly President.

In her message for the day, UN High Commissioner for Human Rights Michelle Bachelet highlighted that the UN was established in response to “the murderous dehumanization and hatred propagated by the Nazi regime” during World War Two, to rebuild a “world of justice and peace”.

“But today”, she lamented, “people who are viewed as different are facing many forms of hatred, with even leaders fueling discrimination or violence against Jews, Muslims, migrants or other members of minority communities”.

Ms. Bachelet underscored that humanity must not be allowed to return to “this unjust and cruel mindset”.

The High Commissioner, lauded “the women, men and young people around the world who demonstrate their courage, empathy and principle by standing up for tolerance and human rights in the face of efforts to dehumanize and demonize people”.

A “permanent rampart” against the rise of hate requires a “principled education” of minds and hearts, maintained Ms. Bachelet.

She said a human rights education not only ensures that universal human rights principles and lessons of history are absorbed, but also empowers people to hold their governments accountable.

“It fosters a sense of common humanity while aiding people to make informed choices; to resolve conflict in a non-violent manner; and to participate responsibly in their communities and societies”, she upheld, adding “and I believe every country and community can benefit from them today”.

♦ Receive daily updates directly in your inbox - Subscribe here to a topic.
♦ Download the UN News app for your iOS or Android devices.
Holocaust Remembrance Day|Auschwitz|anti-Semitism 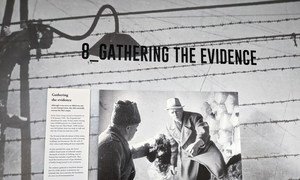 Seventy-five years ago, when soldiers of the Soviet army entered the Auschwitz concentration camp in occupied Poland, they were “stunned into silence” by what they saw, UN Secretary-General António Guterres recalled on Tuesday.