As we see a deeply worrying resurgence in antisemitic attacks around the world, “solidarity in the face of hatred is needed today more than ever”, the UN chief told an annual Holocaust Remembrance Ceremony at New York City’s historic Park East Synagogue.

At @PESynagogue, Secretary-General @antonioguterres marks 75th anniversary of liberation of Auschwitz-Birkenau: "Solidarity in the face of hatred is needed more than ever, as we are seeing a worrying resurgence in antisemitic attacks." Full remarks here: https://t.co/iDVXHCwvSV

He reflected upon the resurgence of neo-Nazis and white supremacists spreading venomous ideology and memes online that “poison young minds”.

While the world is revolted by the horrific details of the Auschwitz death camps, Mr. Guterres maintained that everyone must look, learn and relearn the lessons of the Holocaust, so that it is never repeated.

He said that because prejudice and hatred thrive on insecurity, frustrated expectations, ignorance and resentment, leadership that fosters social cohesion and addresses the root causes of hatred, is needed at all levels.

An investment by all parts of society towards rooting out rising antisemitism, can be made, and done in a spirit of mutual respect, Mr. Guterres noted.

In the lead up to International Holocaust Remembrance Day, on Monday, the UN launched a poignant photo exhibition commemorating 75 years since Auschwitz-Birkenau, the largest Nazi extermination camp, was liberated.

More than 1.1 million people were estimated to have been murdered in that one camp in occupied Poland, nine out of ten of them Jews.

Today, collective action against antisemitism and other forms of bias continues to be important for the dignity and human rights of all people everywhere.

♦ Receive daily updates directly in your inbox - Subscribe here to a topic.
♦ Download the UN News app for your iOS or Android devices.
Synagogue|holocaust|anti-Semitism 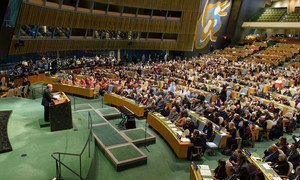