UN News/Elizabeth Scaffidi
The exhibit "75 years after Auschwitz - Holocaust Education and Remembrance for Global Justice" reflects the continued importance of collective action against antisemitism and other forms of bias to ensure respect for the dignity and human rights of all people everywhere.
21 January 2020
Culture and Education

Seventy-five years ago, when soldiers of the Soviet army entered the Auschwitz concentration camp in occupied Poland, they were “stunned into silence” by what they saw, UN Secretary-General António Guterres recalled on Tuesday.

While the Nazis had attempted to hide evidence of mass murder, “millions of clothing items and tons of hair told their own appalling story”, the UN chief said, opening an exhibit at UN headquarters in New York marking the 75th anniversary of the liberation of Auschwitz-Birkenau.

The closure of the camps marked the end of the Holocaust itself, but it was just the beginning of efforts to ensure that such crimes never happen again.

Understanding our history connects us to the essential human values of truth, respect, justice and compassion – UN chief

“I will never forget my visit to Yad Vashem two years ago”, Mr. Guterres recalled, referring to The World Holocaust Remembrance Center located in Jerusalem. “I was shocked once again by the ability of antisemitism to reinvent itself and re-emerge time and again, over millennia”.

Pointing to “a frightening upsurge in antisemitic attacks” over the past few years, the Secretary-General spelled out: “We can never lower our guard”.

He maintained that this was “part of a troubling increase in xenophobia, homophobia, discrimination and hatred of all kinds”, adding that even Nazism itself was threatening to reemerge – “sometimes openly, sometimes in disguise”.

The UN chief cited “remembrance and education” as essential parts of prevention efforts, “because ignorance creates fertile ground for false narratives and lies”. 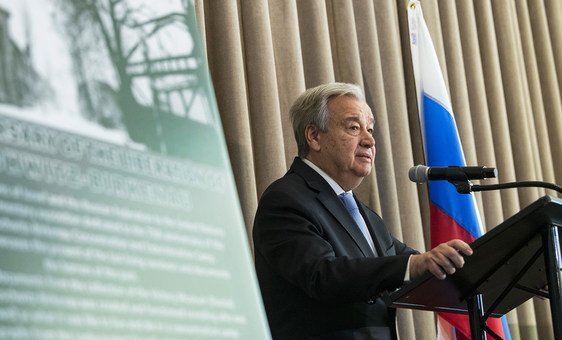 Mr. Guterres paid tribute to Holocaust-survivor-in-attendance, Zoltan Matyash, as well as all other survivors “who inspire us with their strength and their example”.

“As survivors grow older, it is essential that we keep their memories alive and carry their testimony forward in new ways for new generations”, emphasized the Secretary-General.

The exhibit 75 years after Auschwitz - Holocaust Education and Remembrance for Global Justice, underscores the continued need for collective action against antisemitism and other forms of bias.

“And that is why exhibitions like this are so important”, maintained Mr. Guterres. “These portraits of Holocaust survivors speak to us of the dignity, humanity and interconnectedness of each unique member of our human family”.

More to be done

The UN chief flagged “their heartbreaking stories of survival and courage” as an inspiration to “combat persecution, hatred and discrimination, wherever they are found”.

He also noted that the General Assembly will hold a gathering in a few days to pay tribute to Holocaust victims and to renew international commitment to “prevent any repetition of such crimes against humanity”.

“Understanding our history connects us to the essential human values of truth, respect, justice and compassion”, he said, adding that as these values come under attack from all sides, “we must reaffirm them more strongly than ever”.

Mr. Guterres vowed to stand firm “every day and everywhere” against antisemitism, bigotry and hatred of all kinds.

“The world failed all those who died, and those who continue to suffer as a result of the Holocaust”, concluded the Secretary-General. “We cannot fail them again by allowing their stories to be forgotten”.

♦ Receive daily updates directly in your inbox - Subscribe here to a topic.
♦ Download the UN News app for your iOS or Android devices.
holocaust|Auschwitz 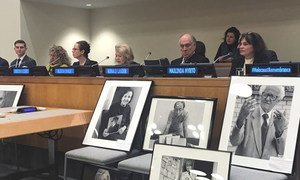 The Holocaust illustrates how easily “people can move from condoning brutality, to committing genocide” and shows that “leaders who sanction hate speech or make anti-Semitic or xenophobic slurs” are encouraging their own citizens “to do the same”, the UN’s head of Global Communications told leading members of the Jewish community at UN Headquarters in New York on Thursday. 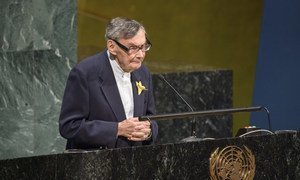