In 2020, 4.6 million Haitians, about 40% of the total population, will require urgent humanitarian assistance in which over 57% of them are women and 45.5% are children.

OCHA reports that deteriorating economic conditions this year—including low growth rate, high inflation and an increase in the cost of basic food items—have had a negative impact on the humanitarian situation in the Caribbean nation.

At the same time, insecurity and social tensions meant aid workers had limited access to a large part of the country.

As a result, the number of Haitians facing food insecurity rose to 3.7 million this year, up from 2.6 million in 2018.

OCHA expects the figure will reach 4.2 million by March, with some 1.2 million Haitians likely to experience “emergency levels” of food insecurity.

“The situation is expected to remain unstable in the coming months, which will further weaken the country’s economy and, consequently, the ability of the poorest Haitians to meet their basic needs as well as the capacity of the State to provide essential services,” the agency said.

OCHA and its partners supported 455,000 people in Haiti during the first nine months of the year.

However, lack of funding prevented them from reaching even more.

A $126 million humanitarian plan for Haiti, launched in February, was only 32 per cent funded: among the lowest in the world, according to OCHA.

Humanitarians are seeking $252 million to support more than two million people in Haiti in 2020.

Overall, 4.6 million citizens, or around 40 per cent of the population, mainly women and children, will require urgent assistance.

♦ Receive daily updates directly in your inbox - Subscribe here to a topic.
♦ Download the UN News app for your iOS or Android devices.
ocha|Haiti 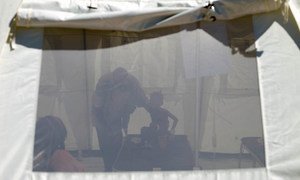