PAHO
The Pan American Health Organization (PAHO) launches Vaccination Week in the Americas in Brazil, urging countries in the region to unite to end measles.

‘A much deeper, faster and more ambitious response is needed’

There are 10 years left to achieve the United Nations’ 2030 Agenda for Sustainable Development, an ambitious plan to create a better future for people and the planet.

However, at the first Sustainable Development Goals (SDGs) Summit, which took place at UN Headquarters in New York in September 2019, Secretary-General António Guterres warned that the world is set to miss the Agenda deadline, citing deadly conflicts, the climate crisis, gender-based violence and persistent inequality.

“Half the wealth around the world is held by people who could fit around a conference table”, Mr. Guterres told the delegates, “and at the current pace, almost 500 million people could remain in extreme poverty by 2030”.

“A much deeper, faster and more ambitious response is needed”, said the report, “to unleash the social and economic transformation needed to achieve our 2030 goal”

In a bid to bring about that transformation, the UN Secretary-General called for a “Decade of Action”, with the three main pillars of global action, centred around greater leadership, and increased resources; local action, such as sustainable city plans; and people action, which brings in elements of society including youth, the media, academia and the private sector.

The Secretary-General’s call has been answered by a host of countries and other stakeholders, who have decided to undertake “SDG Acceleration Actions”, in order to help speed up the process of making the 2030 Agenda a reality.

In Brazil, for example, the non-governmental organization (NGO) Public Health Institute has partnered with a range of organizations, including the São Paulo local government, São Paulo University, the Novartis Foundation and Johnson & Johnson, to create a forum aimed at reaching the goal of cutting one-third of premature mortality caused by noncommunicable diseases, such as diabetes, by 2030, and improve Brazil’s level of universal health coverage.

According to the partnership, the forum is a neutral ground for the public and private sector to collaborate and learn from each other, and work together for sustainable and scalable solutions that have a real impact.

So far, the forum has led to joint public-private programmes on noncommunicable disease, increased opportunities for the private and public sectors to participate in discussions with civil society, and an alliance for advocacy in cardiovascular care.

Making waves in the finance sector

Without financing, there is no chance of bringing about the 2030 Agenda.

The UN estimates that $7 trillion dollars’ worth of investments needs to be redirected toward businesses that are aligned with Agenda goals, every year for the next 10 years.

In Stockholm, Sweden, a team of students, machine learning enthusiasts and bankers have created Waves, an online tool that allows investors to choose a portfolio that matches their values, and the SDGs they are passionate about – from gender equality, to clean water and fighting the climate crisis.

As the users make money, the tool helps to measure impact. For example, if they decide to invest in Beyond Meat – a company whose production of plant-based “meats” was designated as a 2018 UN Environment Programme (UNEP) Champion of the Earth – Waves will show how many tons of harmful greenhouse gas emissions have been saved.

Finland to be a carbon-neutral country in 15 years

Although the 2019 COP25 UN Climate Conference was seen by many as a lost opportunity to raise global climate action ambition, several important announcements were made, such as the European Union’s commitment to achieve carbon neutrality by 2050.

Finland, however, has gone even further as the country’s Government pledged to go carbon neutral by 2030, and then work to go “carbon negative”. This means actively removing carbon dioxide from the atmosphere, which can involve nature-based solutions, such as planting more trees, or technology to directly removing CO2 from the air.

In describing its SDG Acceleration Action, the Finnish Government notes the importance of a “just transition” to a clean economy, taking into account the impact on employment when evaluating emission-reduction solutions, ensuring that the measures are fair from a social and regional perspective, and involving all sectors of society.

Governments, businesses and other stakeholders with innovative, ambitious and impactful commitments, can register their plans here. Each one will be reviewed by the UN Department on Economic and Social Affairs (DESA), and presented on a portal that displays details of the initiatives and follow-up information on their impact on specific SDGs. 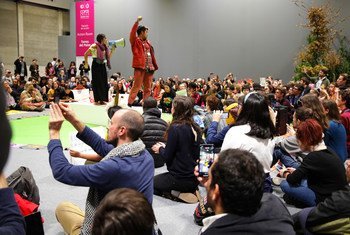 Negotiations at the COP25 UN climate conference in Madrid finally ended on Sunday, wrapping up an event which saw much progress made by the private sector, and by national, regional and local governments. However, there was widespread disappointment that no overall consensus was reached on increased climate ambition. 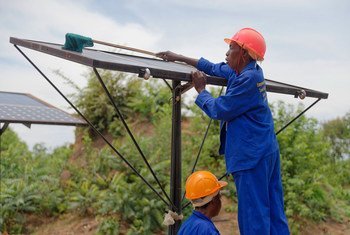