Those responsible for the recent execution and abduction of civilians in northeastern Nigeria must be held accountable, the UN Secretary-General has said, according to a statement issued on Tuesday by his spokesperson.

Media reports indicate that suspected insurgents carried out the attacks on Sunday during an ambush of a humanitarian convoy just outside Maiduguri, capital of Borno state.

The UN and humanitarian partners condemned the violent incidents and urged the Nigerian authorities to do their utmost to prevent further violence and brutality and to protect the civilian population, including aid workers. https://t.co/46Bnt0XHpI

UN chief António Guterres has expressed his deepest condolences to the families of the victims while also underlining UN solidarity with the people and Government of Nigeria.

“The Secretary-General recalls that attacks by a party to an armed conflict that target civilians, aid workers, and civilian infrastructure violate international humanitarian law,” said the statement.

“Those responsible for these atrocities must be held accountable. International human rights law and international humanitarian law must be fully respected, and all civilians in Nigeria must be protected.”

The top UN humanitarian official in Nigeria said he was “horrified” by the reports, though information was still being received.

He added that aid workers in the region have condemned the incidents and what he described as “the increasing practice” by armed groups of setting up checkpoints targeting civilians.

“It is urgent for the Nigerian authorities to do their utmost to prevent further violence and brutality and to protect the civilian population, including aid workers, from such grave violations of international laws, especially women and children who are among the most vulnerable and are caught up in the violence,” he said in a statement issued on Monday.

The extremist group Boko Haram has been operating in northeastern Nigeria for the past decade, which has forced some seven million people to flee their homes, according to UN estimates.

Mr. Canhandula said more than 36,000 people have been killed since the start of the conflict, roughly half of them civilians, while nine aid workers were killed this year.

He reported that there has been an upsurge in violence, particularly along main roads over the past six months, which has resulted in a deterioration in the humanitarian situation.

This year alone, more than 160,000 people fled their homes for shelter in camps that are already congested, he said. 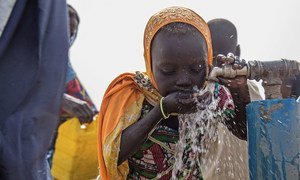 The UN envoy for West Africa and the vast Sahel region, told the Security Council on Monday that in recent months, the region has been “shaken by unprecedented violence”.