UNICEF/Alessio Romenzi
A child walks through the rubble of a building which was destroyed in an airstrike, during fighting between Iraqi security forces and ISIL in western Mosul. 11 March 2017.
19 December 2019
Peace and Security

The head of the UN Counter-Terrorism Office (UNOCT) has highlighted the importance of tolerance in combating the “corrosive spread” of violent extremism.

Vladimir Voronkov was speaking in Abu Dhabi on Thursday at the closing of a regional conference aimed at empowering young people to prevent and counter violent extremism and terrorism.

“Tolerance is central to building cohesion and solidarity, tightening the social fabric of our societies. This is an essential bulwark against the corrosive spread of violent extremism”, said Mr. Voronkov.

“The journey of achieving tolerance must start with social inclusion and not stop until social cohesion.”

Mr. Voronkov was presenting the key conclusions of the two-day conference, which was co-organized by his Office, the United Arab Emirates and Hedayah, an international organization working to counter violent extremism.

The 250 participants represented more than 30 countries, international and regional organizations, civil society, as well as the UN.

He said they agreed that the threat from ISIL, Al-Qaida, and other terrorist groups remains acute and widespread, while also underlining the need to further strengthen international and regional cooperation.

Speaking on behalf of the co-chairs, Mr. Voronkov called for greater understanding of this generation of young people.

“We need to embrace an attitude of empathy towards our youth and understand the era of uncertainty they live in, where old institutions are increasingly vulnerable to questions. We need to foster the value of empathy in them towards others as a first step to breeding tolerance”, he stated.

“We need to build bridges and understanding to promote resilience and rejection of narratives that demonize and dehumanize the other.”

The conference was organized under three thematic sessions, one of which looked at enhancing partnerships between Governments, youth, and community and religious groups.

Mr. Voronkov stressed that based on the discussions in this segment, more must be done to engage young people in helping to shape counter-terrorism policies and programmes.

He added that placing victims of terrorism at the centre of prevention efforts “sends a strong and powerful message that helps put a human face to the effects of terrorism and builds resilient communities.” 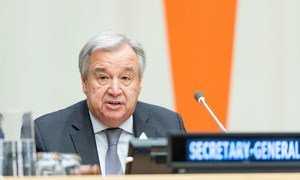