In December 2013, in the village of Meliandou, in Guinea, a toddler named Emile Ouamouno died. It was a tragedy for his family, but the child’s death took on a much wider significance, when Emile was named as patient zero, in what became the worst outbreak of Ebola in history.

The deadly, highly contagious virus spread rapidly through Guinea, as well as neighbouring Liberia and Sierra Leone, to become known as the Western Africa Ebola Outbreak. the economies of the three countries came close to collapse, and health services were strained to their limits. Some 6,000 deaths were recorded that year, and whole communities paralysed by fear.

By August 2014, the World Health Organization (WHO) had declared the outbreak a Public Health Emergency of International Concern (PHEIC), in order to ensure a coordinated international response, release international funding, and halt the further spread of the disease to other countries.

It would take two years until the WHO was able to declare the PHEIC over, by which time it had recorded 28,616 cases of Ebola in Guinea, Liberia and Sierra Leone, and 11,310 deaths.

A 2016 independent report commissioned by WHO, noted that there had been a delay in identifying the unprecedented scale of the outbreak, and highlighted the importance of improved training for teams of health workers and improved communication between health networks.

Sadly, since 2018, another part of Africa has been contending with the second largest Ebola outbreak on record: more than 2,200 lives have been lost, amid some 3,300 confirmed infections in the Democratic Republic of Congo (DRC).

The eastern part of the country, where the outbreak is centred, is also facing serious insecurity and violence, which is hampering efforts to contain the disease. Following fighting in November 2019, the WHO declared that around a third of its Ebola response team in the Beni region had been temporarily relocated, a move that would, the UN health agency warned, make the further spread of the virus more likely.

Hopes were raised for the environment in December 2015, at the adoption of the Paris Agreement on climate change. For the first time, practically all countries of the world pledged to combat the climate crisis and adapt to its consequences, which include the existential threat of global warming.

Ban Ki-Moon, the then Secretary-General, hailed the agreement as a “monumental triumph”, writing on social media that it “sets the stage for progress in ending poverty, strengthening peace and ensuring a life of dignity and opportunity for all.”

The deal was adopted following two weeks of negotiations at the COP21 UN climate change conference, covering the areas deemed necessary for a landmark conclusion: mitigation, in order to keep temperatures no more than 2 degrees Celsius higher than pre-industrial levels; adaptation, so that countries can deal better with the impacts of climate change; and support, with finance available for the most vulnerable, and poorest nations.

The adoption took place in a spirit of high emotion and hope, with tears in the eyes of many delegates. Mr Ban said that all of those involved should be proud of what they had achieved, but ended his remarks to delegates by noting that the Agreement is just the beginning, because “the work starts tomorrow”.

Four years on, the deal is still seen as a key staging post on the long road towards a cleaner, more sustainable global economy, but there have been many indicators that not enough work has been done: a host of damning environmental reports and studies have shown continuing damage to the environment, due to man-made climate change, and the likelihood that if we continue on the current path, temperatures will soar well beyond the level of 1.5 degrees, and the consequences for many will be catastrophic.

Mr Ban’s successor as UN chief, António Guterres, has made the climate crisis one of the central pillars of his mandate, instituting several initiatives that ensured the issue was given fresh momentum and focus, particularly in 2019 (more in the third and final part of our Decade in Review).

2016: blueprint for a better future and Colombia Peace process

The Sustainable Development Goals are a call for action by all UN Member States to promote prosperity while protecting the planet.

For the first 15 years of the 21st Century, many of the UN’s activities were guided by the Millennium Development Goals, with eight objectives ranging from halving extreme poverty rates, to halting the spread of HIV/AIDS and providing universal primary education.

By 2015, the target year for the goals, much positive work had been achieved, but a new vision was needed. This came in the form of the 2030 Agenda for Sustainable Development, which was officially launched in 2016, and was designed to build on the MDGs and complete what they were not able to accomplish.

The Agenda set out a plan of action for people, the planet and prosperity, including the eradication of poverty, described by the UN as “the greatest global challenge, and an indispensable requirement for sustainable development”.

17 Sustainable Development Goals (SDGs) were announced, with targets designed to bring about action in five main areas: People (eradication of poverty and hunger), Planet (protection from degradation and urgent action on climate change), Prosperity (ensuring prosperous and fulfilling lives for all), Peace (fostering societies free from fear and violence) and Partnership (in order to mobilize the means to achieve the Goals).

At the launch of the Goals, the then Secretary-General, Ban Ki-Moon, said that the SDGs represent a “shared vision of humanity and a social contract between the world’s leaders and the people. They are a to-do list for people and the planet, and a blueprint for success”.

In 2020 there will be just 10 years left to achieve the Goals and implement the Agenda, and the UN has launched a Decade of Action to speed up the process. This was announced in September 2019, at the first Summit on the progress of the Agenda, which was convened at UN Headquarters in New York.

Speaking at the closure of the two-day conference, Deputy Secretary-General Amina Mohammed said that she had drawn three concrete messages from the summit: a renewed commitment from world leaders to implement the Agenda, which she described as critical to respond to the world’s greatest challenges; an acknowledgement that the Goals are off track, and a determination to step up efforts to achieve them; and clarity on the task ahead, with a decisive decade left to “nurture more ambitious global action; local action; and people action”.

On 24 November of 2016, UN Secretary-General Ban Ki-moon welcomed the signing of a peace agreement between the Government of Colombia and the Revolutionary Armed Forces of Colombia-People's Army (FARC-EP), ending an armed conflict that had been ongoing for more than five decades, since 1964.

Both parties requested the Security Council to establish a mission to monitor the compliance of the commitments stipulated in the agreement, such as the disarmament and reinstatement of ex-combatants into civil society.

In March 2017, the UN Mission in Colombia began the process of verifying  the handing over of weapons from the FARC-EP, which successfully concluded on 26 September. In total, 8,994 weapons were delivered, including guns, assault rifles, machine guns and rocket launchers; as well as almost two million ammunition and 3528 antipersonnel mines.

The Organization continues to support compliance with the Peace Agreement  through the UN Verification Mission in Colombia , approved by the Security Council in its 2017 resolution 2377.

During his visit to the country in January 2018, UN Secretary-General António Guterres said that the peace process was an “extraordinary” transformation that generated hope for the country's future .

However, since the signing of the Peace Agreement and until the beginning of 2019, 163 murders of social leaders and human rights defenders in the country had been verified. A total of 454 cases were reported, most of which  occurred in areas abandoned by the former FARC-EP and where the State has a limited presence.

The UN chief has said that the situation of indigenous leaders deserves special attention because there has been "a serious increase" in the number of murders, threats, cases of confinement, forced displacement and forced recruitment. He has also indicated his concern about the killings of more than 100 demobilized FARC.

Mr. Guterres has flagged that much remains to be done to consolidate peace, which will require a coordinated effort  by the Government and state institutions, political parties, the private sector and civil society, with the accompaniment of the international community. 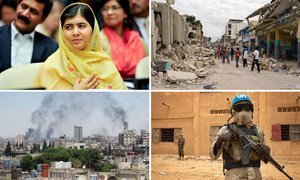