© UNHCR/Modesta Ndubi
19-year-old Najla Umda Adam Suleiman, fled with her family to Chad when she was only three years old after the conflict broke out in Darfur.

The world needs to transform the way it responds to refugee situations and do more for the struggling countries that shelter almost all of them, UN Secretary-General António Guterres said on Tuesday, at a high-level forum seeking solutions to a decade of extraordinary mass displacement.

More must be done to protect refugees, respect their rights and address the reasons why people leave their homes in the first place, Mr. Guterres told the Global Refugee Forum in Geneva, meeting for the first time.

“Now more than ever, we need international cooperation and practical, effective responses. We need better answers for those who flee, and better help for communities and countries that receive and host them.” he said.

Speaking a year after countries signed the Global Compact on Refugees in New York – described by Mr. Guterres as the “blueprint” to reaffirm their human rights – the global forum comes after what experts have called “a decade of displacement”.

"Believe in us. Invest in us and you will see, we will all be stronger for it."🗣️ Aya Abdullah speaks truth to power at the #RefugeeForum. pic.twitter.com/8RACfskgfI

More than 70 million people are forcibly displaced – double the level 20 years ago, and 2.3 million more than just one year ago, according to UN data.

More than 25 million of them are refugees, having fled across international borders, unable to return to their homes.

In reference to the main international agreements that have for decades underpinned assistance to refugees, the Secretary-General said that there is a need today to “re-establish the integrity of the international refugee protection regime”, based on the 1951 Refugee Convention and 1967 Protocol.

“Indeed, at a time when the right to asylum is under assault, when so many borders and doors are being closed to refugees, when even child refugees are being detained and divided from their families, we need to reaffirm the human rights of refugees,” Mr. Guterres said.

As event co-host, UN High Commissioner for Refugees Filippo Grandi called on the international community to “reboot” its stance on people in need of protection.

“Injustice, conflict and violence. This is why we are here,” said the UNHCR chief. “Our world is in turmoil, and 25 million refugees are looking to us for solutions.”

Assessing today’s global action on refugees as “piecemeal and unbalanced”, Mr. Grandi added that with “71 million people uprooted from their homes globally, inside and outside their countries, it's time to reboot our responses”.

But rather than displaying solidarity for people in need, “countries with more resources” had shifted the burden to the poorest nations.

This meant that “refugees are pushed aside too…often in camps, cut off from the social and economic life of the communities hosting them,” Mr. Grandi said. “Humanitarian aid helps, and remains vital, but is not enough and not adequate to turn the tide from despair to hope”, he added.

Encouraging support for greater burden-sharing by all countries, Switzerland Federal Councillor Ignazio Cassis noted that his country had committed around $125 million over the next four years to refugee protection.

Although around eight in 10 refugees were hosted in developing countries, Swiss towns and cities were contributing to their protection by helping them to integrate into their communities Mr. Cassis maintained, in his capacity as co-host of the Global Refugee Forum.

“Life is like a bicycle; you have to move forward to avoid losing your balance…This applies to all of us, we must not lose our balance and look ahead,” Mr. Cassis said, recalling a saying by Albert Einstein, one of the country’s most famous refugees.

He also underscored the positive role that could be played by religious partners in finding solutions to refugee protection and integration, citing the “unique” written accord between the country’s Christians, Jews and Muslims to this effect, based on “ethics and solidarity”.

On behalf of Germany, Heiko Maas, Federal Minister for Foreign Affairs, called for the refugee “burden” to be distributed among “a greater number of shoulders and broader shoulders”.

Highlighting the pressures faced by developing nations that left their borders open to vulnerable families forced to flee their homes, Pakistan Prime Minister Imran Khan said that such influxes “causes problems that cannot be imagined by richer countries”.

Europe was struggling in a different way with refugees, Mr. Khan added, amid the emergence of populist politicians which “cashes in on public distress” and the supposed threat posed by newcomers.

In Pakistan, which hosts almost three million refugees, “a country with massive unemployment, we know what we go through,” he said.

“This is a moment for ambition”, Mr. Guterres told delegates. “It is a moment to jettison a model of support that too often left refugees for decades with their lives on hold: confined to camps, just scraping by, unable to flourish or contribute. It is a moment to build a more equitable response to refugee crises through a sharing of responsibility.”

António Guterres served as UN High Commissioner for Refugees for a 10-year period (2005-2015) prior to his election as Secretary-General of the United Nations. He referred to the protections of refugees as one of the great issues of this era, or any era.

“One might say that as refugees go, so goes the world,” he said, adding that although solidarity “runs deep in the human character...Today we must do all we can to enable that humanitarian spirit to prevail over those who today seem so determined to extinguish it.”

What is the Global Refugee Forum?

The first ever Global Refugee Forum brings together refugees, heads of State and Government, UN leaders, international institutions, development organizations, business leaders and civil society representatives, among others, at the United Nations in Geneva.

The UN Refugee Agency (UNHCR) is co-hosting the Forum together with Switzerland, and it is being co-convened by Costa Rica, Ethiopia, Germany, Pakistan, and Turkey. The aim of the Forum is to generate new approaches and long-term commitments from a variety of actors to help refugees and the communities in which they live. Worldwide, over 70 million people are displaced by war, conflict, and persecution.

Pledges in support of refugees were expected on Tuesday by the World Bank and the Inter-American Development Bank, as well as by the private sector. 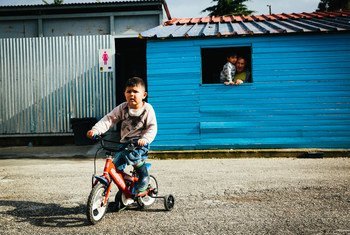 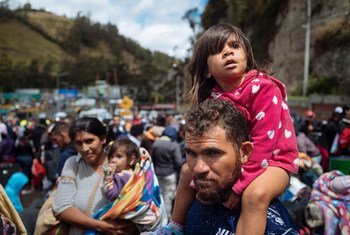