© UNHCR/Achilleas Zavallis
A young boy rides his bicycle inside the Kara Tepe accommodation site, on the Greek island of Lesvos.

On Tuesday, in addition to the presence of UN Secretary-General António Guterres – previously the High Commissioner for Refugees – other high-level attendees are expected to include Turkish President Recep Tayyip Erdogan, whose country has hosted millions of displaced Syrians for years.

“The international community is coming together to announce bold, new measures to ease pressures on host countries, enhance refugee self-reliance, and find lasting solutions for those uprooted from their homes by wars and persecution”, the UN Refugee Agency (UNHCR) said ahead of three days of discussions led by High Commissioner Filippo Grandi.

Everyone has a part to play in helping refugees. What will yours be?#EveryoneCounts pic.twitter.com/YYRP7QmZNt

Turkey’s policy towards the refugee influx created by nearly nine years of civil war in Syria, is likely to be among the good practices highlighted at the UN Palais des Nations, from 16-18 December; in particular, how the Turks have managed to double the number of children in formal education since 2016, to nearly 650,000 this year.

Italy’s voluntary guardianship system is also in focus for enabling protection and care for unaccompanied minors, while Ethiopian investment in public water works has been shown to benefit refugees and host communities alike.

VIPs from Costa Rica, Germany, Ethiopia and Pakistan are also due to attend, their Governments having expressed a willingness to engage in finding solutions to alleviating the plight of the growing number of people in need of international protection.

Guided by the Global Compact on Refugees – inked by governments a year ago in New York - the Geneva meeting “is an opportunity to translate the principle of international responsibility-sharing into concrete action” that is more equitable, sustained and predictable, UNHCR said in a statement.

During the forum, national governments and other stakeholders will also have to opportunity to announce concrete pledges and contributions “that will achieve tangible benefits for refugees and host communities”, the agency insisted.

All Aboard the Solidarity Train

Highlighting the forum’s social media campaign message that #EveryoneCounts – and dovetailing with UNHCR’s longstanding emphasis on access to education as a key factor in arming refugees with skills they need for a better future – it announced that Sesame Street puppet Grover has already arrived in the Swiss city.

Echoing the impact of emergency displacement on youngsters ahead of the meeting, UN Children’s Fund UNICEF reiterated its warning that they represent around half of all refugees - around 13 million.

More than half of school-aged refugee children are not in class, UNICEF added, and “at the end of 2018, 138,000 unaccompanied and separated children were on the move alone”, it said in a statement.

In a bid to generate innovative approaches and long-term commitments from as many sectors of society as possible to help refugees and host communities, UNCHR has encouraged senior representatives from the private sector to attend, too.

These include the Ingka Group – part of the IKEA empire - the LEGO Foundation and British-based multinational Vodafone, which provides free communications and technical support in areas affected by natural or humanitarian disaster.

In the seven years since the telecoms firm set up its “Instant Network Emergency Response” units, its 70 staff have intervened in 14 countries and facilitated millions of calls to disaster victims, aid workers and refugees, according to its website.

Non-profit organization, the Tent Partnership for Refugees, is also attending the forum.

"One of the world’s most disturbing trends has been the shocking increase in the number of people driven from their homes by conflict and other calamities”, Tent Partnership founder Hamdi Ulukaya says on the non-profit’s website. “How we respond to this global humanitarian crisis may well be one of the defining challenges of our generation."

Working with around 100 partners including coffee chain Starbucks and McCain Foods, Tent has helped some 200,000 refugees in 34 countries, its website notes.

Hailing regional efforts, senior UN official urges Latin America and the Caribbean to continue to protect people on the move 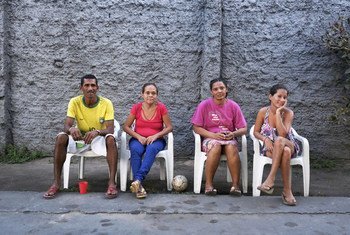 Brazil’s move to recognize thousands of refugees from crisis-wracked Venezuela through a new accelerated procedure, has been welcomed by the UN refugee agency, UNHCR. 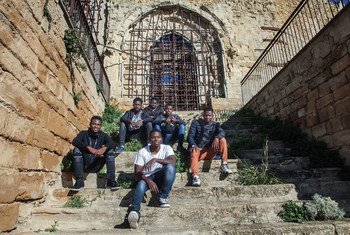