UN Photo
From left: Malala Yousafzai attends an education event at UN Headquarters; People walk along Port-au-Prince streets following the 2010 earthquake in Haiti; UN peacekeeper on patrol in Kidal, Mali; Smoke drifts into the sky from buildings and houses hit by shelling in Homs, Syria.

The decade began with an immense disaster in Haiti, already the poorest country in the Western hemisphere. A devastating, 7.0 magnitude earthquake hit the island on January 12, killing hundreds and thousands of people (220,000 according to Haitian Government figures), and causing severe damage to buildings.

A week after the tragedy, the Security Council authorized an increase of 3,500 peacekeepers for Haiti, on top of the 9,000 already in the country, to reinforce MINUSTAH, and help with recovery, reconstruction and stability efforts. As UN Special Envoy for Haiti, former US President Bill Clinton was closely involved with these efforts.

The UN Mission in Haiti, MINUSTAH, did not escape the effects of the quake: the Christopher Hotel, which housed the Mission HQ, collapsed and 102 UN staff died, including the Secretary-General’s Special Representative to Haiti, Hédi Annabi, his deputy Luiz Carlos da Costa and Acting Police Commissioner Doug Coates of the Royal Canadian Mounted Police.

UN staff member found alive after being buried in rubble at mission headquarters at Christopher Hotel in Haiti.

132 UN workers were rescued by international teams , including Jens Kristensen, who managed to survive, despite spending five days trapped under the rubble of the building. Mr. Kristensen, a senior humanitarian worker, had already worked through the 2002 earthquake in Afghanistan, the 1999 quake in Turkey and one in Ecuador in 1987, although this was his closest brush with death. Escaping with little more than a bruise on his upper arm and a scratch on his right hand, Mr. Kristensen was back at work three days after his rescue.

In April 2011, the then Secretary-General, Ban Ki-moon, phoned Syrian President Bashar Al-Assad to tell him that he was “greatly disturbed” by reports of violence in the country, following demonstrations which were part of a broader pro-democracy movement across North Africa and the Middle East that led to the downfall of long-standing regimes in Tunisia and Egypt, which became known as the Arab Spring.

Neither of them could have known that, eight years on, the conflict would still be ongoing, provoking in the meantime a major refugee crisis, hundreds of thousands of civilian deaths, and a major humanitarian disaster: over 5,6 million people have fled Syria since 2011, and some 6,6 million are thought to be displaced within the country, according to the UN refugee agency, UNHCR.

Today, the fighting is far from over, but the UN has been working hard since 2011 to find a political solution to this highly complex conflict. In 2019, UN-brokered talks brought together 150 representatives from the Government, opposition and civil society, for the first face-to-face talks in five years.

Without making any promises that the talks will end the suffering of the Syrian people, the UN Envoy to the country, Geir Pedersen, told the Security Council in November that they could be a “door-opener” to finally providing a solution to the country’s brutal conflict.

2012: Malala becomes ‘the most famous teenager in the world’

From a young age, Pakistani student Malala Yousafzai was known for speaking out in favour of the education of girls, and highlighting the atrocities of the Taliban.

She was born and brought up in the volatile Swat Valley, in the northwest of the country, and came to prominence in 2010, when she featured in a New York Times documentary about her life in the region, as the Pakistani military entered the region and clashed with Taliban fighters.

Whilst taking the bus home from school, in October 2012, Malala, and two other girls, were shot by a Taliban gunman: she was hit in the head by a bullet, but survived and eventually recovered.

The attack made waves around the world, and was widely condemned: on Human Rights Day that year, a special tribute to Malala was held at the Paris headquarters of the UN Educational, Scientific and Cultural Organization (UNESCO), pushing for action to ensure every girl’s right to go to school, and to advance girls’ education as an urgent priority.

Malala’s activism and profile have only grown since the assassination attempt. She won several high-profile awards, including the 2014 Nobel Peace Prize (alongside Indian social reformer Kailash Satyarthi), and became a UN Messenger of Peace in 2017, with a special focus on girls’ education.

🎥 More UN-related stories in the the 2012 Year in Review

2013: UN Mission set up to protect civilians in Mali

It’s been called the UN’s ‘most dangerous mission’, where peacekeepers have sustained severe and regular casualties from the activities of armed groups in the north of the country, as they attempt to protect civilians from instability, which includes deadly inter-ethnic clashes.

MINUSMA, the UN Mission in Mali, was established in April 2013, when the Security Council voted to approve a 12’600-strong operation, authorized “to use all necessary means” to stabilize the country; protect the local population, as well as UN staff and cultural artefacts; and ensure the flow of humanitarian aid to those who need it.

The creation of the Mission came in the wake of fighting which broke out in January 2012 between Government forces and Tuareg rebels, leading to the occupation of Northern Mali by radical Islamists.

Shortly after the adoption of the resolution approving the deployment, the then Under-Secretary-General for Peacekeeping Operations, Hervé Ladsous, told journalists in New York that the Mission would help the Malian authorities on the way to “constitutional order, democratic governance and national unity”.

Despite the presence of MINUSMA, the situation in the country is extremely challenging for the Blue Helmets in Mali. In December 2019, a UN human rights expert described the security situation as “critical”, with unprecedented incidents of communal violence and deadly attacks from armed groups: in an interview with UN News, Mbaranga Gasarabwe, the UN Deputy Special Representative in Mali, explained that the Mission is part of a wider effort to contain terror groups in the wider Sahel region, which include Burkina Faso, Chad, Mauritania and Niger, as well as Mali. 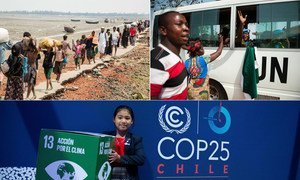 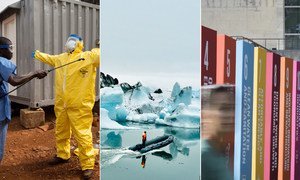