António Guterres issued the charge on Wednesday in a speech to the annual Caring for Climate Meeting, held during the on-going UN COP25 climate conference in Madrid.

The magnitude of the climate emergency is jeopardizing our future and life as we know it. I have come back to #COP25 to appeal for a successful conclusion of the conference and increased #ClimateAction and ambition.

“I’m meeting more and more business leaders that complain that they cannot do more because governments will not allow them to do so, because of the environment that is still created in the bureaucratic, administrative, tax regulatory and other frameworks that are under government control”, he said.

It was launched in 2007 and is convened by the UN Global Compact, the secretariat of the UN Framework Convention on Climate Change (UNFCCC), and the UN Environment Programme (UNEP).

With the climate crisis increasingly jeopardizing life on the planet, the Secretary-General stressed that more collective action will be needed from governments, regions, cities, businesses and civil society.

“While we see some incremental steps towards sustainable business models, it is nowhere near the scope or scale required”, he said.

“What we need is not an incremental approach, but a transformational approach. And we need businesses to unite behind the science by taking rapid and ambitious action across their operations and value chains.”

The “science” refers to the goal of limiting global temperature rise to 1.5 degrees Celsius above pre-industrial levels, in line with the 2015 Paris Agreement on climate change.

This will require reducing greenhouse gas emissions, which contribute to global warming, by 45 per cent by 2030, and achieving carbon neutrality by 2050.

Business and financial leaders have been doing their part to beat climate change, as the Secretary-General acknowledged.

He was encouraged that 170 major companies have committed to set scientific, verifiable emission reduction targets through the ‘Business Ambition for 1.5 degrees’ campaign.

However, he said the business and financial sectors cannot act alone.

Next year, many governments will present plans to reduce their emissions, in line with the 2015 Paris Agreement.  Mr. Guterres forecast that these enhanced Nationally Determined Contributions (NDCs) will include carbon neutral strategies and green initiatives in sectors such as energy, industry, construction and transport.

“In support of these efforts, I am calling on you, leaders from the private sector and civil society, to challenge your Governments to use this opportunity to make clear their economic development policies that will enable your companies to invest decisively in a net-zero future,” he said.

The UN chief added that millions worldwide, particularly young people, recognize that more must be done to limit the worst impacts of climate disruption.

“That’s why they are calling on leaders from all sectors to do exponentially more to address the climate emergency,” he said. “We are quickly nearing our last opportunity to be on the right side of history.”

In his speech to the COP's  high-level event,  the Secretary-General  urged the world’s biggest emitters to do more on climate.

“If we do not reach carbon neutrality by 2050, all our current efforts to promote sustainable development will be undermined,” he said.

Mr, Guterres also laid out 10 priorities to tackle the climate crisis.  They including  securing commitments from the main emitters of more ambitious national commitments by 2020, ensuring that all governments follow the example of the 75 countries that committed to coming forward by next year with net zero emissions strategies for 2050, and ensuring that national commitments include a just transition for people whose jobs and livelihoods are affected in the transition to a green economy.

The teenage climate activist Greta Thunberg was at the UN conference on Wednesday, urging participants to focus on the science behind climate change.

She explained it was important to keep to the 1.5-degree threshold “because even at one degree, people are dying from the climate crisis.”

“Because that is what the united science calls for, to avoid destabilizing the climate so that we have the best possible chance to avoid setting off irreversible chain reactions such as melting glaciers, polar ice and thawing arctic permafrost. Every fraction of a degree matters.”

Ms. Thunberg told world leaders at the UN’s Climate Action Summit in September that they were “failing” her generation, by not taking action to ease the climate crisis fast enough, and on Wednesday, the 16-year-old Swede who founded the school strike movement, was named by TIME magazine as their 2019 Person of the Year.

"As I understand it, this is a recognition of the effect that youth have been having on this debate, and the Secretary‑General has been very clear about the need for the world's leaders to listen to youth.  It is their world that we are currently damaging through our inaction and our delayed action.  One day, they will be the inheritors of the world that we have left for them, and we need to make sure that we have done right by them.  And it's good to see recognition, both of the powerful role they can have when they make their voices heard and of the importance of listening to them," he said. 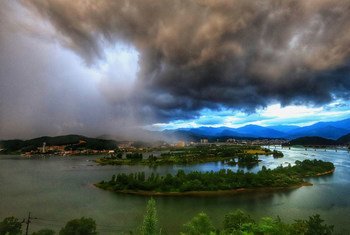 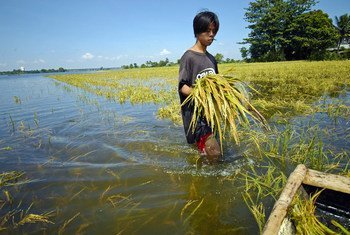