“The deliberate killing of unarmed protesters by armed elements is nothing less than an atrocity against the people of Iraq,” said Jeanine Hennis-Plasschaert, the Secretary-General's Special Representative in the crisis-gripped country.

New reports from the region put Friday's death toll in the dozens with more than 100 injured during nighttime attacks by unidentified gunmen that targeted anti-Government demonstrators in central Baghdad.

“Acts of violence that are gang-driven, arising from external loyalties, politically motivated or intended to settle scores, risk placing Iraq on a dangerous trajectory,” said Ms. Hennis-Plasschaert, who also heads up the UN Assistance Mission for Iraq (UNAMI).

It is essential to join hands in defending fundamental rights, such as the right to peaceful assembly and freedom of speech – UN envoy for Iraq, Jeanine Hennis-Plasschaert

It was essential, she underscored, “to join hands in defending fundamental rights, such as the right to peaceful assembly and freedom of speech.”

Finally, the UN envoy expressed her deepest condolences to the families of those who lost their lives and wished the injured a speedy recovery.

Briefing the UN Security Council via teleconference from the Iraqi capital just four days ago, Ms. Hennis-Plasschaert said that “out of love for their homeland”, thousands of Iraqis have taken to the streets, asking for their country to reach its “full potential for the benefit of all Iraqis”.

“However,” she lamented “they are paying an unimaginable price for their voices to be heard”, pointing out that since 1 October, more than 400 people have been killed and more than 19,000 injured.

She explained that although today’s youth had no recollection of life under the former dictator Saddam Hussein, they are aware of what was promised after his death and “through the power of connectivity, they know perfectly well that a better future is possible”.

Noting that most protesters were peacefully seeking a better life, the Special Representative stressed that “it is the primary responsibility of the State to protect its people”, spelling out that all forms of violence are intolerable and must not distract from “the rightful demands for reform”.

The UNAMI head argued that the country was as at a crossroads that could not be resolved by “buying time with band-aid solutions and coercive measures”.

She called on Iraqis to build a sovereign, stable, inclusive and prosperous country: “Now is the time to act”, Ms. Hennis-Plasschaert said, wrapping up her Council briefing. “The great hopes of so many Iraqis call for bold, forward thinking”. 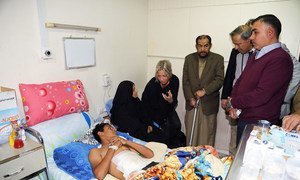