While more pregnant women and children are being protected against malaria than before, more fast-tracking and greater funding are needed to reinvigorate the global response, according to a new United Nations report launched on Wednesday.

“We’re seeing encouraging signs, but the burden of suffering and death caused by malaria is unacceptable, because it is largely preventable”, said Tedros Adhanom Ghebreyesus, the Director-General of the World Health Organization (WHO), the agency behind the World malaria report 2019.

The report notes a significant increase in the number of pregnant women and children in sub-Saharan Africa sleeping under insecticide-treated bed nets and using preventive medicines. However, WHO maintains that progress has stalled in the hardest-hit countries.

In 2018, some 11 million pregnant women were infected with malaria in sub-Saharan Africa, which resulted in low birthweights for nearly 900,000 children.

According to WHO, pregnancy reduces a woman’s immunity to malaria, rendering her more susceptible to infection and at greater risk of illness, severe anaemia and death.

Maternal malaria also interferes with growth in the womb, increasing the risk of premature delivery and low birth weight – a leading cause of child mortality.

And despite encouraging signs that preventive measures are helping protect pregnant women and children, from 2014 to 2018 there was no improvement in the global rate of malaria infections in the hardest-hit countries.

“Pregnant women and children are the most vulnerable to malaria, and we cannot make progress without focusing on these two groups”, the WHO chief spelled out.

Women at the fore

In outlining progress in protecting women and children in sub-Saharan Africa, the report revealed that some 61 per cent of them slept under an insecticide-treated net in 2018, as compared to 26 per cent in 2010.

Moreover, the delivery of antimalarial medicines known as “intermittent preventive treatment in pregnancy” (IPTp) to antenatal care facilities, increased from an estimated 22 per cent in 2017 to 31 per cent in 2018.

Still, too many women do not receive the recommended number of IPTp doses, or none at all.

Some women are unable to access antenatal services. Others who reach a care facility do not benefit from IPTp as the course of drugs are either not available or the health worker does not prescribe it.

WHO recommends insecticide-treated nets and preventive antimalarial medicines to guard pregnant women and children against malaria, along with robust health services that include prompt diagnostic testing and treatment.

Recalling that in 2018, 72 per cent of eligible children benefited from preventive medicine, WHO recommends seasonal preventative drug courses, during the high-transmission rainy season, for children under-five living in Africa’s Sahel subregion.

Another recommended strategy – intermittent preventive treatment in infants (IPTi) – calls for delivering antimalarial medicines to very young children through a country’s immunization programme. The tool is currently being pioneered in Sierra Leone.

Although timely diagnostic testing and treatment are vital, many children with a fever are not brought in for care.

According to recent country surveys, 36 per cent of children with fever in sub-Saharan Africa do not receive any medical attention.

And while 30 countries now implement the approach, bottlenecks in health financing bar most sub-Saharan African countries.

Total funding for malaria control and elimination reached an estimated $2.7 billion in 2018, falling far short of the $5 billion global target.

“The lack of improvement in the number of cases and deaths from malaria is deeply troubling,” said WHO Director-General Ghebreyesus. 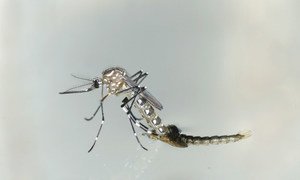