The launch of the Syrian Constitutional Committee could be a “door-opener” to finally providing a solution to the country’s brutal conflict, UN Special Envoy Geir Pedersen said on Friday in a briefing to the Security Council.

Negotiations for the Committee were held in Geneva at the end of October and brought together 150 participants: 50 each nominated by the Government, opposition and civil society.

Feelings of anger and loss, but talks held together

The men and women met over two days in the first face-to-face talks in five years, and the first to include civil society.

However, proceedings were not easy, as Mr. Pedersen revealed. Opinions diverged sharply, deep feelings of anger and loss surfaced, and at times emotions ran high.

“And yet, everyone stayed engaged,” he reported.

“The members of the Committee agreed an initial agenda, and listened to each other’s discourse, and there were efforts in language, tone, gesture and positioning to signal an openness to dialogue. With each passing day, there was a little more of this.”

Women comprised around 30 per cent of the civil society participants, who had no formal political affiliations.

“Let me be clear: There can be no democracy without women’s full, equal and meaningful participation, or without codifying women’s rights and gender equality in any political process,” she stated.

Looking at the bigger picture, Mr. Pedersen expressed concern over the escalation in violence in the north, including the killing of at least a dozen people on Thursday in an attack in besieged Idlib.

James Jeffrey, the United States Special Representative for Syria, underlined the need for a ceasefire. He also called for countries to pressure the Assad regime.

“The United States maintains its position that there can be no reconstruction assistance to Damascus in the areas that it controls until there is a credible and irreversible political process in line with (Security Resolution) 2254,” he said.

“We believe that this position is consistent with many of our European and Middle Eastern partners. We will work closely with them to ensure that this pressure is maintained.”

The Constitution Committee agreed a 45-person body that reviewed ideas and proposals put forward in the larger group.

Negotiations are set to resume in Geneva on Monday.

Russia expressed hope that proceedings will take place “in a constructive atmosphere.”

“We deem it unacceptable to attempt to interfere in its work, or to impose solutions on the Syrians that run counter to their national interests or do not reflect them. It is also unacceptable to impose artificial deadlines or to put forward requirements for concessions from just one of the parties,” said Dmitry Polyanskiy, chargé d'affaires at the country’s Mission to the UN.

Mr. Pedersen urged Committee members and the international community to act in the interest of the Syrian people.

“It is my firm hope that with the Constitutional Committee as a door-opener, the Government and opposition will be able in time to establish a relationship, violence will abate, and conditions on the ground will change, and a comprehensive and decisive solution will finally emerge for the benefit of all Syrians,” he said.

“The Syrians who are leading and owning this process must seize the opportunity that the launch of the Committee offers. And they, and all of us, must build around it a mutually reinforcing dynamic for the sake of the Syrian people.” 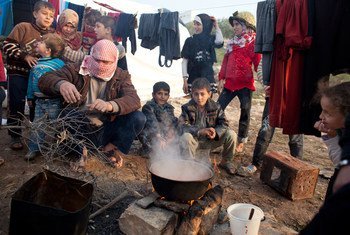