“We are deeply concerned at reports of killings and injuries, and that the authorities may have used excessive force against those participating in the protests”, the experts added, referencing the International Covenant on Civil and Political Rights as setting the standard for the legitimate use of force as being only when “strictly unavoidable”.

Since last Friday, demonstrators have reportedly taken to the streets in some 40 towns and cities across the country, protesting a 50 per cent hike in fuel prices, and the imposition of tight petrol restrictions.

The UN Human Rights Council-appointed special rapporteurs noted “credible reports” that as many as 106 people have been killed between the 15 and 19 November, and as many as 1,000 were arrested, though news reports suggest the figures could be higher. Dozens of protestors have reportedly been killed by live ammunition fired by security forces.

Exact details have been made harder to verify given the Government’s clampdown on internet connectivity that began late Saturday, the UN human rights wing alerted earlier this week.

“We remind the Government of its obligations under the Covenant, and call upon the authorities to ensure that the rights to freedom of opinion and expression, as well as freedom of peaceful assembly and association, are respected and protected”, the UN experts said.

#IranProtests: We are concerned by reported use of force against demonstrators & alarmed that live ammunition has allegedly caused significant number of deaths. Such protests are an indication of deep-rooted grievances that cannot simply be brushed aside: https://t.co/DnSJ8X3U99 pic.twitter.com/GU5MUyfBeF

The right to information

Demonstrations have come on the back of a worsening economic situation in Iran, which the expert group called the result of “economic mismanagement and corruption, as well as the re-imposition of sanctions in 2019”, factors which have “had a significant negative impact on the economic and social rights of everyday Iranians”.

Sanctions imposed by the United States are among the “serious economic challenges gripping the country,” despite its plentiful oil and gas reserves, the UN human rights office, OHCHR, said Tuesday, urging the two nations to engage in meaningful dialogue.

Pulling the plug on internet access points to wider concerns of censorship, the independent experts said: “A country-wide network shutdown of this kind clearly has a political purpose: to suppress the right of Iranians to access information and to communicate at a time of rising protest. Such an illegitimate step deprives Iranians not only of a fundamental freedom but also basic access to essential services”, they explained.

Iranian authorities have warned of decisive action should protests not subside, which raises serious concerns that the situation could spiral further, the experts said.

They encouraged the Government to “seek and engage in dialogue” and refrain from measures which compromise demonstrators’ human rights.

♦ Receive daily updates directly in your inbox - Subscribe here to a topic.
♦ Download the UN News app for your iOS or Android devices.
iran|protests 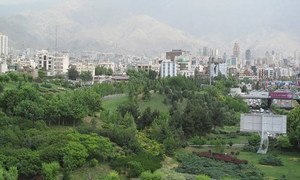