There is a clear link between the seedy underbelly of the seafood industry, and fishers’ safety, now ranked as the second deadliest profession in the world; and more must be done to ensure people dependent on this type of labour are working in safe conditions, UN partners urged on Thursday.

“Every hour fishers die doing their job - not just men, women too”, Maria Helena Samedo, chief for Climate and Natural Resources at the Food and Agriculture Organization (FAO), explained at a major conference organized by the agency in Rome, coinciding with World Fisheries Day on 21 November.

“Human rights violations and unacceptable practices at different stages of the value chain are increasing in fisheries and aquaculture”, she added.

Illegal, Unreported and Unregulated (IUU) fishing leads to over-exploitation of fish stocks, already drained by pollution and climate impacts, and financially burdens honest fishers and the communities that depend on them, FAO and the International Labour Organisation (ILO)  said  in a joint statement at the conclusion of the International Symposium on Fisheries Sustainability.

Beyond injuring biodiversity and economies, IUU casts a dark shadow on already physically-taxing sea labour, with many IUU fishers engaging in transnational crimes, such as human and drug trafficking and piracy.

An estimated 5.8 million fishers in the 🌍 earn less than $1 per day!

To promote sustainable livelihoods and #sustainablefisheries inequalities must be addressed! pic.twitter.com/IfXpEZ2D1f

Around the world, one in ten people depend on fishing to make a living and feed their families, and often, they are some of the poorest in society, according to FAO.

An estimated 95 per cent of those relying on the seafood business to provide for their families, live in Africa and Asia, often enduring gruesome working conditions. In 2019, fishing was ranked and the second most dangerous job in the world, just behind logging.

Crewmembers are notoriously denied previously agreed wages, if they get paid at all, while some captains and boat owners ignore basic human rights, forcing fishers to endure extended periods at sea, under dangerous conditions.

FAO has been working alongside governmental and international partners to tackle the scourge of IUU, a lucrative industry valued at an estimated $10 to $23 billion every year.

Speaking at the Symposium’s conclusion in Rome, Monsignor Bruno Marie Duffé, Secretary of the Vatican’s Dicastery for Promoting Integral Human Development, noted that Pope Francis has spoken of the need for a more integral approach to ecology, and the Holy See has called for greater synergy between governments and maritime authorities to protect human rights in this sector.

By the Symposium’s end, participants are expected to present a technical document that synthesized the information and debate in each of the event’s sessions, to be table at the 34th session of the FAO Committee on Fisheries, set for July 2020.

The document will form the platform for a high-level policy statement on the role, value and sustainability status of global and regional fisheries.

♦ Receive daily updates directly in your inbox - Subscribe here to a topic.
♦ Download the UN News app for your iOS or Android devices.
fishing|sustainability 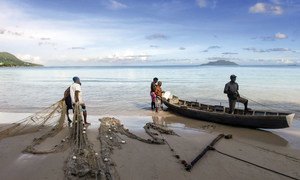 More people than ever rely on fisheries and aquaculture for food, and income, but the seafood industry is facing a “dangerous” sustainability divide when comparing trends in the developed world versus those in poorer regions, the Food and Agriculture Organization (FAO) revealed on Monday. 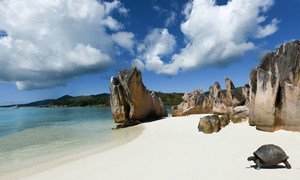 Protecting marine areas from over-exploitation and providing the people who have traditionally lived off the sea with a sustainable alternative livelihood does not come cheap, but in the Seychelles, a focus on financial instruments is making that task easier.