“Breaking up trafficking organizations and addressing the criminal use of fixed routes is crucial to countering movements of foreign terrorist fighters and arms, including to and from Iraq and Syria”, he said.

“Our two organizations are also committed to promoting peace in Afghanistan and supporting the Afghan people as they build a more stable and prosperous future. Addressing the cultivation of opium, which provides revenue to the Taliban, can play a part in undermining the Taliban’s ability to destabilize communities and to wage war.”

The organization represents more than three billion people—the largest combined population of any regional grouping in the world.

Mr. Guterres outlined how the UN is strengthening links between the two partners, including in the area of counter-terrorism.

“I am particularly proud of our engagement with SCO on the United Nations Joint Plan of Action for the Implementation of the Global Counter-Terrorism Strategy in Central Asia – the first regional initiative of its kind,” he said.

While security measures are vital, combating terrorism and its links to transnational crime takes many forms.

The Secretary-General said the UN is working with SCO countries to support efforts that address root causes.

“Terrorist and extremist groups often share a misogynistic ideology that subjugates women and girls. Our work to promote gender equality and the rights of women and girls is central to efforts to tackle extremism, organized crime and the trafficking of people and drugs,” he added.

Additionally, both the UN human rights office, OHCHR, and the UN Office on Drugs and Crime (UNODC) have supported countries in areas including the handling of digital evidence.

“I am confident that in joining our efforts, the United Nations and the Shanghai Cooperation Organization can make a positive contribution to the lives of people in Eurasia, strengthening regional cooperation at all levels,” he said. 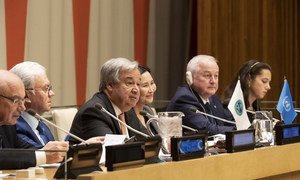