UN Photo/Manuel Elías
A view of the sculpture - Good Defeats Evil - on the UN Headquarters grounds, presented to the UN by the Soviet Union on the occasion of the Organization’s 45th anniversary.
18 November 2019
Peace and Security

Speaking on Monday during the inaugural session of the deliberations on a nuclear-weapon free Middle East, UN Secretary-General António Guterres said the zone would have significance beyond the region.

“I therefore hope this Conference will serve as the start of an inclusive process in which all the States of the region can participate,” he said.

The first conference on the establishment of a Middle East zone free of #nuclearweapons & other #WMD begins today. “I hope this serves as the start of an inclusive process in which all the States in the region can participate”@antonioguterres said. Read : https://t.co/XadniNlDAV pic.twitter.com/fn6HiyxhW6

Currently, there are five nuclear-free zones worldwide: in Latin America and the Caribbean, Africa, Central Asia, Southeast Asia, and the South Pacific.

Not only do they eliminate any possibility of a nuclear conflict in these locations, they also provide a means for countries to work together on common regional security, according to Mr. Guterres.

“They also provide tangible security benefits by giving their members assurances against the use, or threat of use, of nuclear weapons. At the same time, these zones can provide additional assurance to the global community of the peaceful nuclear intentions of the countries in these regions,” he said.

Significance beyond the region

For the Secretary-General, these motives are important to the Middle East, where the overall situation remains a serious concern for the entire world.

“Meanwhile, concerns over nuclear programmes persist and continue to drive tensions,” he said.

“We have yet to see meaningful accountability for the use of chemical weapons. There are signs of active arms competition, including the acquisition and use of new weapon technologies.”

Latin America and Caribbean an inspiration

The Middle East-focused meeting, which runs through Friday, marks the first session of a conference that will be held annually until a legally binding treaty for the nuclear-free zone is agreed.

The UN chief hoped participants will be inspired by the example set by Latin America and the Caribbean, where the first zone was proposed in the aftermath of the Cuban Missile Crisis in October 1962.

“Despite the tensions and politics of the Cold War, countries of the region persevered and in 1967 established a flexible and durable arrangement, which has served as a model for all such successive zones,” he said.

“Let us be guided by their experience – and those of other regions – as we advance in all of our efforts across the disarmament agenda.”

Tijjani Muhammad-Bande President of the UN General Assembly, noted the continued existence of more than 15,000 nuclear warheads stockpiled around the world, and stressed that any use of these weapons would be a humanitarian and ecological catastrophe, causing irreplaceable damage.

“We cannot in good conscience ignore these risks,” he said, adding that the Treaty on the Non‑Proliferation of Nuclear Weapons remains the cornerstone of the nuclear disarmament and non‑proliferation regime, and its 2020 Review Conference will propel a stronger commitment towards a nuclear‑weapon‑free world.

Although nuclear weapons have only been used once in history, the 1945 bombings of the Japanese cities of Hiroshima and Nagasaki during the Second World War attest to their devastation.

These are the most dangerous weapons on Earth, able to “destroy a whole city, potentially killing millions, and jeopardizing the natural environment and lives of future generations...,” as the UN Office for Disarmament Affairs has stated.

On Saturday, November 23, Mr. Guterres  welcomed the successful conclusion of the Conference , and congratulated the participating States, noting the adoption of a Political Declaration , in a statement released by his spokesperson's office.

The Secretary-General underscored the UN's support for efforts by the participating States to pursue, in an open and inclusive manner, the establishment of a Nuclear-Weapons and Other Weapons of Mass Destruction-Free Zone in the region.

♦ Receive daily updates directly in your inbox - Subscribe here to a topic.
♦ Download the UN News app for your iOS or Android devices.
nuclear weapons|Middle East 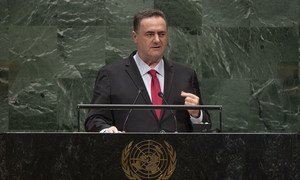 The international community must join together to prevent Iran from developing nuclear weapons, the Foreign Minister of Israel told the UN General Assembly on Thursday evening. 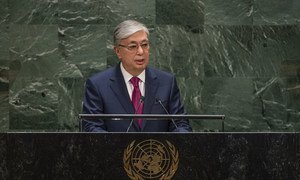