At a time when extremism and fanaticism are too often unleashed, when “the venom of hatred” continues to poison a part of humanity, “tolerance has never been more vital a virtue”, the United Nations cultural agency’s chief has said in her message on the International Day for Tolerance.

“Tolerance is more than standing idly by or remaining insensitive to differences between men and women, cultures and beliefs”, Audrey Azoulay, the Director-General of the UN Educational, Scientific and Cultural Organization (UNESCO) said, but instead a “state of mind, an awareness and a requirement.”

Tomorrow is #InternationalDayforTolerance. #Tolerance means respect, acceptance and appreciation of the rich diversity of our cultures and unique ways of being human - @AAzoulay

It is at the core of the @UN values. #toleranceday pic.twitter.com/Q5TOzAdztW

In 1996, the UN General Assembly invited Member States to observe the Day each year on 16 November to, among other things, foster mutual understanding among cultures and peoples. The 2019 edition of the Day will be marked this Saturday.

Ms. Azoulay stressed that tolerance is “to realize that cultural diversity is a form of wealth, not a factor of division”.

“It is to perceive that each culture, beyond immediate or apparent differences, is a constituent part of universality and speaks the common language of humanity.”

Since its foundation, UNESCO has aimed to “build peace by combating the intolerance that still too often tears our societies apart, and by relentlessly fighting all forms of racism and discrimination”, the agency chief maintained.

Ms. Azoulay cited the words of former Director-General Federico Mayor: “UNESCO bears and echoes the message of tolerance, true to its mission of being ‘the conscience of the United Nations’”.

In conclusion, Ms. Azoulay invited everyone to share UNESCO’s message of tolerance and peace.

♦ Receive daily updates directly in your inbox - Subscribe here to a topic.
♦ Download the UN News app for your iOS or Android devices.
UN International Day for Tolerance|intolerance 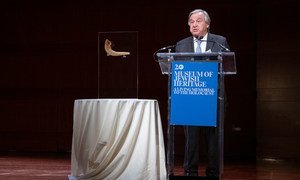 Since nobody is born to hate, intolerance can be prevented and unlearned, the UN Secretary-General said on Thursday, in a speech underlining his continued fight to stamp out antisemitism, racism and other forms of hatred.