Unsplash
Doha, the capital of Qatar.

A group of independent UN human rights experts is calling for a “paradigm shift” in Qatar to protect people in the Gulf State from arbitrary detention.

The assessment by the UN Working Group on Arbitrary Detention came in a statement on Thursday following a 10-day visit to the country, where they interviewed more than 200 people who have been deprived of their liberty.

“Detention is currently the general rule in cases such as debt, adultery, intimate relations out of wedlock and drug use”, they said, in presenting their preliminary findings.

Qatar joined the International Covenant on Civil and Political Rights in May 2018 which the Working Group hailed as “a major step forward”, adding that implementation is now key.

The experts urged the authorities to ensure the Covenant’s provisions are fully reflected in the domestic legal system as currently it “falls significantly short” in guarding against arbitrary detention.

“Existing laws that allow prolonged administrative detention without judicial control and due process guarantees ought to be abolished, as these place individuals outside the protection of the law”, they said.

“We call on the authorities to immediately repeal the Protection of Community Law, the State Security Law and the Law on Combating Terrorism.”

The UN Working Group on Arbitrary Detention is made up of independent human rights experts mandated to advise the UN Human Rights Council under a system known as the Special Procedures (Read more about this here).

Members travelled to Qatar at the invitation of the Government, meeting with officials and representatives from civil society and other relevant groups.

They visited 12 places where liberty is restricted, both inside and outside the capital Doha, including police stations and pre-trial detention facilities, as well as a prison, deportation centres and psychiatric hospital.

The experts commended the community-based approach used at the Hamad Psychiatric Hospital in Doha, which prioritises personal liberty rather than institutional care, while also working to reduce stigma.

However, they expressed serious concern about the deprivation of liberty at the hands of private individuals, with women and migrant workers disproportionately affected.

The Working Group will present its final report to the UN Human Rights Council next September. 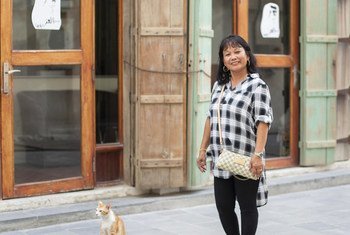 New legislation in Qatar which will allow foreign workers to freely change jobs and leave the country without the approval of their employers, has been praised by the International Labour Organization (ILO) as “a momentous step forward in upholding the rights of migrant workers.”