FAO/Ubirajara Machado
Children eat a meal at their school which is taking part in a school feeding programme in Latin America and the Caribbean.

The Panorama of Food and Nutritional Security 2019, jointly published by a group of UN health agencies, urged countries to take swift action to address the malnutrition issue across the region.

"The explosive increase in obesity, which affects 24 percent of the regional population, about 105 million people - almost double the global level of 13.2 percent - not only has huge economic costs, but also threatens the lives of hundreds of thousands", said Julio Berdegué, Regional Representative for the UN’s Food and Agriculture Organization (FAO).

Improving food labeling, ensuring safety and quality of food sold on the street and reformulating ingredients of certain products to ensure nutritional value can also aid the growing problem.

The fastest growing trend in the region’s food sector is that of ultra-processed food products, increasing the population's exposure to excessive amounts of sugar, sodium and fat, according to the report.

Every year, 600,000 people in the region die from diet-related diseases, such a diabetes, hypertension and cardiovascular illnesses, while inadequate diets are threatening future generations, as the rates of both childhood and adolescent obesity tripled between 1990 and 2016.

At least 13 countries in the region have taken measures that seek to favor adequate food, and eight have improved advertising regulations, and four have implemented food labeling laws.

"We must act now to reverse this trend and prevent children from suffering the consequences of poor diets on their health and their future quality of life," said Carissa Etienne, Director of the Pan American Health Organization (PAHO), which is also WHO’s Regional Office.

She added that "we need the commitment of the whole society and public policies that regulate unhealthy food products, create environments conducive to physical activity and promote healthy eating at school and at the family table."

Tuesday’s report stresses that need for social protection programs among other measures that promote food safety and quality essential to improve nutrition.

Today, social protection programmes supply more than 200 million people in Latin America and the Caribbean, roughly a third of the regional population, with breakfast, snacks and lunch, including 85 million schoolchildren. 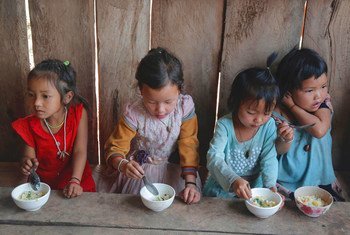