United Nations human rights experts on Friday condemned the excessive use of force during Chile’s ongoing street protests, and in a statement underscored that violence “can never be the answer to people's social and political demands”.

At least 20 people are reported to have been killed and about 1,600 injured, including police officers, during protests that began in early October over rising transport costs and inequality, that has become deeply entrenched in the Latin American country.

Throughout the weeks of demonstrations, the Human Rights Council-appointed independent experts have spoken out against the excessive force used by security forces.

“The high number of wounded and the way in which non-lethal weapons have been used, seem to indicate that the use of force was excessive and violated the requirements of necessity and proportionality," the seven experts maintained.

As violence escalated, a state of emergency was declared in several provinces on 19 October. And to date, thousands have also been detained, including children and adolescents.

The experts also expressed deep concern over reports of excessive force against people prior to being detained, and allegations of the ill-treatment and beating children, which may constitute torture.

Moreover, there have been reports of sexual violence against women, men and adolescents, including practices such as forced stripping, touching and rape in detention.

“Women and children have been actively participating in the ongoing protests and the State must address their specific protection concerns”, the experts asserted.

Rejecting all violence committed by individuals, the experts stressed that the Chilean Government has an obligation “not only to respect human rights but to protect people against violent acts committed by private individuals”.

They spelled out that the Government officials and politicians “must allow protests…by isolating those who resort to violence, while guaranteeing that everyone in the country can enjoy their rights”.

The independent experts welcomed Chile’s decision to invite a UN Human Rights Office mission to assess the situation through identifying the main patterns of human rights violations, analyzing the response of Chilean State institutions as well as the causal factors leading to the mass-demonstrations.

The experts have corresponded with the authorities and discussed their willingness to pursue and determine the responsibilities in cases of human rights violations, particularly those committed by State agents.

Their positions are honorary and the experts are neither UN staff, nor paid for their work. 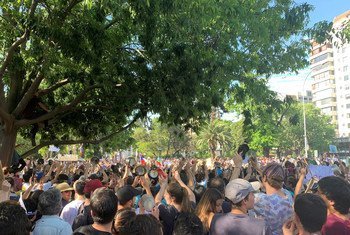 The top UN human rights official is calling for politicians and civil society in Chile to engage in “immediate dialogue” to resolve the deadly crisis which has gripped the nation in recent days.