OCHA/Gema Cortes
Mark Lowcock (right), Under-Secretary-General for Humanitarian Affairs and Emergency Relief Coordinator, pays a visit to a hospital that serves one million people in a Caracas neighborhood in Venezuela.
6 November 2019
Humanitarian Aid

“Millions cannot afford the bare minimum of food, water, and health care”, the Under-Secretary-General for Humanitarian Affairs continued, adding that “the situation continues to deteriorate”.

Most Venezuelans have been affected by a years-long political and economic crisis in what was formerly Latin America’s wealthiest nation, leading to a major shrinking of the economy, fueled by hyperinflation.

Around 4.5 million have left the country, the vast majority to other nations in the region, marking the largest exodus in South American history, according to UN figures: “Too many people are risking perilous journeys every day, facing sexual exploitation, trafficking and abuse”, said Mr. Lowcock.

“I have seen myself how the health system is on the verge of collapse with many hospitals lacking the most basic water and electricity infrastructure…Hospital patients, many of whom are already critically ill, are at high risk of losing their lives from new infections they are acquiring while they are in hospital, because basic cleaning and disinfection cannot be done”.

And a lack of medicines and medical care workers only exacerbates the situation, added the UN relief chief.

“Preventable diseases, including malaria and diphtheria are back with a vengeance”, he said, citing people with chronic health conditions, pregnant and nursing women, infants and those living with disabilities as being “among the most vulnerable”.

Having visited Jose Gregorio Hernandez hospital, the UN official learned that medicines are scarce; power outages mean that only one-fifth of the hospital has electricity; and water runs only two days a week, often through rusty and broken pipes oozing a “filthy stench that lingers throughout”.

Over the last year, UN-supported aid programmes have made a difference by:

“Some hospital workers, I was told, spend more than their monthly salary just getting to work”, he asserted.
Aid assistance

During meetings with senior Government officials and members of the National Assembly, he observed that despite the political divisions, there was “a common will to address the humanitarian situation”, with both endorsing the Humanitarian Response Plan developed this year by the UN and partners to address the most dire needs of Venezuelans.

Underscoring that “only a political solution can end the suffering”, Mr. Lowcock said that in the meantime, the UN “will continue to provide humanitarian aid to the most vulnerable in accordance with our principles of impartiality, independence and neutrality”.

“I have received firm commitments that the implementation of the plan will be supported, to the benefit of vulnerable Venezuelans across the country”, he affirmed. “All parties must respect our principled humanitarian approach and not manipulate the needs-based assistance”.

Stressing that “human suffering is not a political weapon”, he said continued monitoring of assistance delivery would safeguard its transparency “in accordance with independent assessments”.

Mr. Lowcock thanked those who have contributed financial resources for UN-supported humanitarian activities, noting that more than $155 million has been received this year. But he said the $223 million Humanitarian Response Plan “remains under-resourced and the biggest constraint to delivering humanitarian assistance remains funding”.

“Everyone needs to do more”, he maintained, pointing out that next month provisional plans for the UN-supported humanitarian response in Venezuela next year is due to be published. “Substantially more financial resources will be needed, and we will seek additional funding from donors”.

“We will need to find a way to unlock Venezuelan resources to contribute more to humanitarian action” and “place a greater priority on reducing the immediate suffering of the people of this country”, he concluded.

♦ Receive daily updates directly in your inbox - Subscribe here to a topic.
♦ Download the UN News app for your iOS or Android devices.
Venezuela|Humanitarian Coordinator 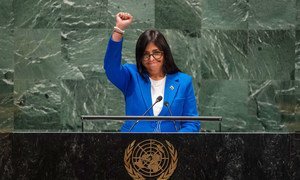 The Vice-President of Venezuela on Friday criticized administrations which have recognized National Assembly president Juan Guaidó as leader of the South American country.