Current trends and public pronouncements by some political leaders in Bosnia and Herzegovina indicate an effort to roll back reforms implemented since the end of the Balkan wars two decades ago, the UN Security Council heard on Tuesday.

Valentin Inzko, the international community’s High Representative there, urged ambassadors not to forget about the country as it continues to work towards unity.

“Bosnia and Herzegovina has proven to have serious problems related to its functionality, the rule of law and the fight against corruption, the freedom of media and in many other areas, which reflect the pervasiveness of separatism and divisive policies in the country, and the general lack of focus of the country's political elite on issues of real importance to the citizens,” he reported.

Despite general elections held a year ago, Bosnia and Herzegovina is still without a government, comprising representatives from the Bosnian, Serbian and Croat communities.

Mr. Inzko said this means no new legislation, including a State budget, can be adopted. Response to issues such as the migration challenge is also affected.

Bosnia and Herzegovina applied for European Union membership three years ago. In May, the European Commission delivered an Opinion setting out 14 key areas for action towards accession. However, this too has been a casualty of the ongoing failure to appoint authorities.

Additionally, there has been no progress in implementing a seven-point agenda that will need to be fulfilled prior to the closure of the Office of the High Representative.

These developments are taking place against what Mr. Inzko described as “a backdrop of continuing divisive, destabilizing rhetoric”, including on the part of politicians who claim to support EU membership.

However, he said what has been most reprehensible is “revisionism or outright denial” about genocide committed during the war, including Srebrenica, where thousands of Bosnian Muslim men and boys were killed in July 1995.

Mr. Inzko noted that next year marks 25 years since the signing of the Dayton Peace Agreement which brought an end to the war and set up two entities in the country: the Bosnian-Croat Federation and the Serb Republic.

Prior to his briefing, the 15 ambassadors unanimously adopted a resolution extending the mandate of the European Union force that supports counterparts in Bosnia and Herzegovina and contributes to safety and security there

“The current trends and various political pronouncements certainly indicate an ongoing effort to roll back the reforms that have carried the country this far.”

The High Representative urged the international community to preserve investments made over the past two decades and deliver on the promise of a better future for Bosnia and Herzegovina, adding that "we must recognize backsliding when it occurs, and in such instances,  acknowledge that our mission is not yet complete."

♦ Receive daily updates directly in your inbox - Subscribe here to a topic.
♦ Download the UN News app for your iOS or Android devices.
security council|BOSNIA AND HERZEGOVINA 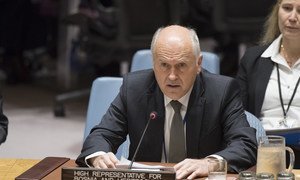 With elections looming, tensions across Bosnia and Herzegovina are rising alongside inflammatory rhetoric against the country’s long-standing peace agreement, a senior figure monitoring its implementation has warned.